COP27: We’re on a highway to climate hell. Let’s build an offramp

Our second dispatch from the U.N. conference looks at holding wealthy nations accountable for their outsize role in climate change. Plus: What comes after 1.5°C?

SHARM EL-SHEIKH, Egypt — Happy election, America! As I write, Americans are headed to the polls to pick their leaders. Here in Egypt, more than 180 heads of state are converging for COP27’s first full week of proceedings. (See yesterday’s dispatch for some scene-setting.)

Monday opened with a bolt of urgency from U.N. Secretary-General António Guterres, who thundered to attendees:

The clock is ticking. We are in the fight of our lives. And we are losing. Greenhouse gas emissions keep growing. Global temperatures keep rising. And our planet is fast approaching tipping points that will make climate chaos irreversible. We are on a highway to climate hell with our foot still on the accelerator.

Guterres’ apocalyptic language underscores a widening reality gap around the world. On one side are poorer countries, which have done little to cause climate change but are being hit hard by the crisis here and now. On the other side are richer regions that are responsible for most emissions, but where climate impacts can feel distant and less urgent.

For those observing from a global perch, like Guterres, climate-amped disasters are multiplying faster than many societies can respond, let alone afford — from unprecedented flooding in Pakistan and drought-induced famine in Africa to heat waves in Europe and wildfires around the globe.

This reality gap animates a rising sense of injustice among developing economies. Low- and middle-income countries are arguing for compensation to help them survive the effects of climate change (adaptation) and prevent worse in the future (mitigation). Already, many experience greater harm than do rich countries, but they have less wealth with which to repair storm damage, house refugees or feed famine-hit peoples.

To date, wealthy nations haven’t met even their current commitments to spend $100 billion a year to help developing countries cut emissions and cope with the climate crisis — even in a year when many mobilized hundreds of billions of dollars to cushion citizens from the impacts of energy-fueled inflation sparked by Russia’s invasion of Ukraine. The real cost of funding climate needs in developing economies will likely be closer to $1 trillion per year by 2030, according to a major new report out today.

At COP27, advocates for loss-and-damage transfers frame the obligation as a mix of environmental justice and simple financial liability — after all, one party has caused harm to another, and thus the harmed party should be compensated for damages. The issue is geopolitically fraught given the enormous potential payments at stake.

In past negotiations, the United States (historically the biggest emitter ) has resisted loss-and-damage terms. But the U.S. negotiating team has signaled a new openness to the idea so long as China (today the biggest source of emissions) also ponies up. On Monday, The Financial Times broke news about a pending U.S. plan to use carbon offsets to channel funds from rich economies to help poor countries adapt and transition.

The case for loss-and-damage payments is growing, but the politics are fractious — particularly as many economies teeter toward recession. Sometimes referred to as ​“climate reparations,” the issue typically triggers populist conservative factions, including many Republicans in the U.S.

💰 Coming up: Wednesday is finance day at COP27, so expect a wave of announcements from the public and private sectors related to loss and damage. Our next dispatch will include a peek at RMI’s work to train financial professionals to help developing countries better access climate finance.

📉 More on energy trends: Putin’s war has roiled energy markets globally. But the crisis has also steeled the European Union’s resolve to end its addiction to Russian energy. As a result, the continent is decarbonizing faster than ever, argues RMI’s Kingsmill Bond.

“Greenhouse gas emissions keep growing,” the U.N.’s Guterres said, and ​“global temperatures keep rising.” The question of how much and how soon average global temperatures will increase has occupied COPs since the ​‘90s, starting at a time when the world was on track for 4°C or more of warming — a doomsday scenario that would involve mass extinctions, melted poles, submerged cities and worldwide starvation.

At 2015’s COP21 in Paris, a coalition led by island nations — such as Fiji, little more than a meter above sea level — overcame rich nations’ resistance and pushed through an ambitious goal. To the surprise of many, nearly 200 countries committed to take steps to limit the rise to 1.5°C.

The hard-won target has since become an epochal rallying cry: a world-unifying goal that guides everything from national policy to corporate net-zero goals. And there has been substantial progress since, thanks to technology advances, big investment in clean energy and greenhouse-gas-cutting policies.

Yet it’s not been enough. Ahead of COP27, with the world currently on a path to around 2.5°C of warming, the U.N. Environment Programme concluded that no credible path remains to avoid exceeding 1.5°C, at least for a time. What’s more, science is finding that actual climate damage is exceeding levels predicted by the models that inform current targets.

As The Economist notes, ​“Overshooting 1.5°C does not doom the planet. But it is a death sentence for some people, ways of life, ecosystems, even countries.” 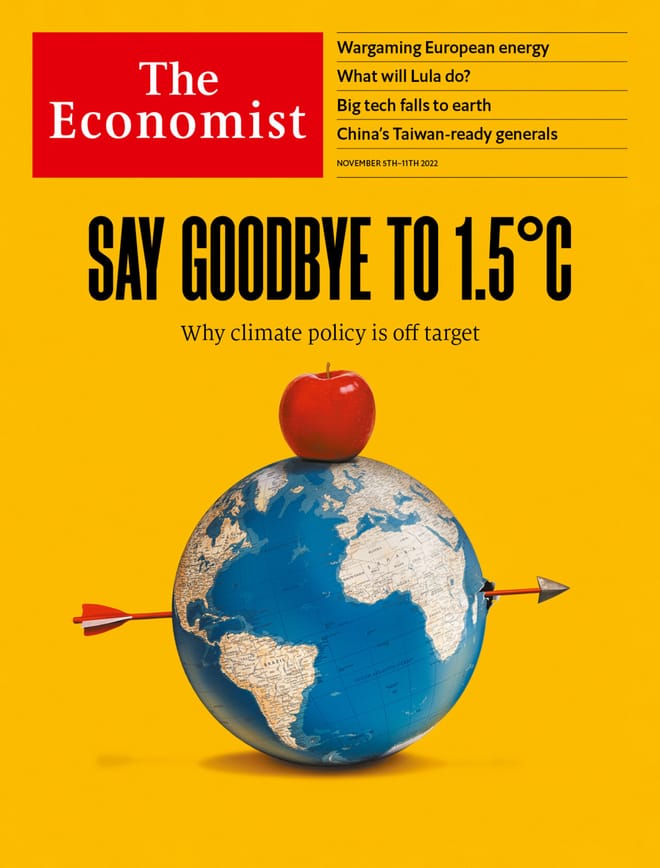 The November 5, 2022 weekly edition of The Economist

As temperatures continue to rise, the U.N.’s official numerical target matters less than the urgency to act immediately and with more focus on equity.

✴️ More on 1.5: The 1.5°C framework will remain a North Star guiding ambitious climate plans — including those in the U.S. At COP27, America Is All In — a coalition of local governments, nonprofits, businesses and cultural institutions co-led by RMI — released analysis illuminating how local action can help the U.S. hit its goals to halve emissions by 2050.

The steady stream of releases, reports and news flows like the mighty Nile here at COP27. Here are a few highlights.

🌏 For more on these and other COP-related happenings, watch RMI’s Twitter account, @RockyMtnInst, and our COP27 resource page.

Adam Aston is chief storyteller at RMI, an energy and climate journalist, and a Pittsburgh native.