At the U.N. climate conference, projects are helping Africa get minigrids, helping the Caribbean switch to clean energy and helping Indonesia ditch coal.

SHARM EL-SHEIKH, Egypt — Today the world population surpassed 8 billion people, according to U.N. projections. ​“The milestone is an occasion to celebrate diversity and advancements while considering humanity’s shared responsibility for the planet,” U.N. Secretary-General António Guterres said in a statement.

This ​“shared responsibility for the planet” came through at COP27 today as countries and organizations banded together to provide funding and projects where the need is greatest. (Check out our previous dispatches from COP27.)

A just transition for Africa

Half of the people living in sub-Saharan Africa don’t have access to electricity. Today, the COP27 presidency launched the Africa Just and Affordable Energy Transition Initiative during the opening session. The aim is to provide all Africans with access to clean energy and economic development.

At the same time, the U.N. Development Programme, RMI and the African Development Bank promoted the new Africa Minigrids Program. It’s a country-led technical assistance program to help African countries scale up and accelerate the deployment of renewable energy minigrids. ​“The Africa Minigrids Program is a clear demonstration of developing countries taking more control over their development destiny and addressing the need for access to electricity with a clean energy future,” Achim Steiner, administrator of the program, said at the launch.

Ironically, also at the same time, the Panafrican Climate Justice Alliance was protesting the decision at COP27 to postpone until 2024 the negotiations over loss-and-damage funding, a term for compensation to developing countries for the losses and damages that they face due to climate change.

Countries unite to help Indonesia get off coal

Indonesia is one of the world’s largest producers and exporters of coal. Its own electricity comes largely from its coal reserves as well.

Today at the G20 summit in Indonesia, a coalition of countries including the U.S., Japan and Canada committed to mobilizing $20 billion to help Indonesia shut down its coal power plants. Under the Indonesia Just Energy Transition Partnership, the country is committing to hitting peak carbon dioxide emissions from electricity in 2030, seven years sooner than its currently estimated peak, with the larger goal of reaching net-zero emissions by 2050.

Back at COP27 in Egypt, the news resonated with efforts to develop funding models to decarbonize grids in other developing regions. At a press conference, German Development Minister Svenja Schulze called it ​“a signal here at the COP that we are moving toward implementation and advancing concrete partnerships.”

Indonesia is the second nation to launch such a partnership. South Africa joined with a handful of wealthy nations to launch the first Just Energy Transition Partnership at last year’s COP26.

Clean energy for the Caribbean

RMI and Lion’s Head Global Partners collaborated to launch a $75 million Caribbean Climate Smart Fund to invest in energy projects across the Caribbean. Although the region has seen an increase in climate finance and local interest in the prospect of transitioning to clean energy, more than 44 million people in the region still rely on fragile, fossil-based electricity systems. Projects under the new fund will support climate resilience in the face of intensifying storms. The projects will also stabilize electricity prices and increase energy security while avoiding many millions of dollars’ worth of fossil fuel imports each year.

WTF? Where do we stand with loss and damage?

The first draft of the official COP27 agreement was released, and the language on loss-and-damage finance is unclear. The draft actually doesn’t give any hint of whether the final deal will include a new loss-and-damage fund.

A handful of people at COP27 have been spotted wearing big, red “Where’s the Finance?” buttons, including one of Egypt's top climate envoys, U.N. High-Level Climate Champion Mahmoud Mohieldin.

Wealthy nations haven’t even met their pledges for more traditional climate finance to help countries develop clean energy systems and adapt to climate change. In 2009, rich countries pledged to contribute $100 billion a year in climate finance for developing nations starting in 2020. But in 2020, the most recent year for which data is available, they came up with only $83 billion.

💵 Want to go deeper into the world of climate finance? Check out this Climate 101 article. 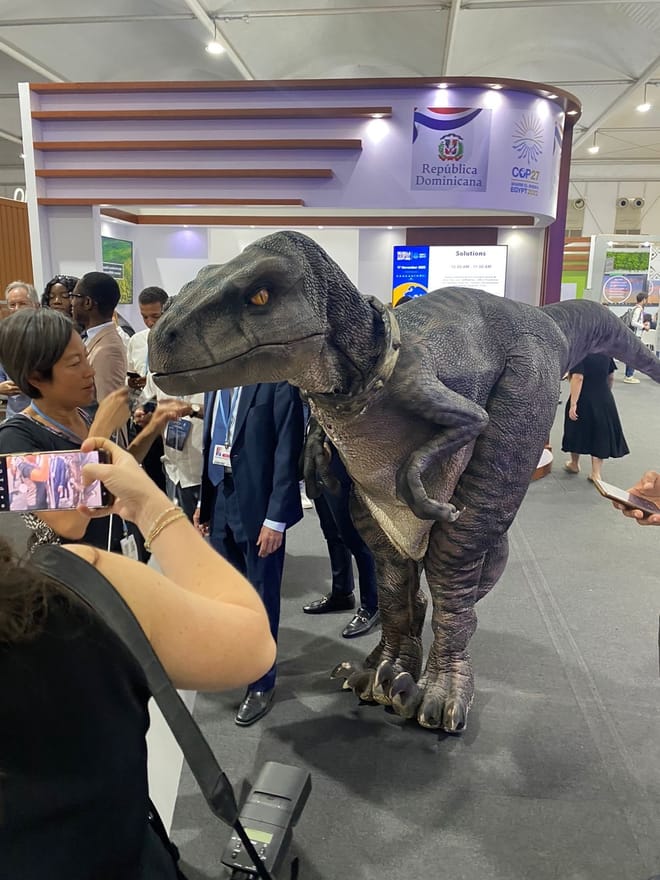 Frankie the dinosaur is a big hit at COP, urging world leaders to take action on climate change.

Laurie Stone is the managing editor for RMI. She has a master's degree in energy engineering and has been writing about renewable energy and the clean energy transition for more than three decades.