Putin’s war will drive a faster shift to clean energy

Vladimir Putin seems to have unwittingly hastened the global transition to clean energy. Since Russia invaded Ukraine on February 24, countries in the European Union and elsewhere have been scrambling to replace fossil fuel imports from Russia. In the EU’s case, that amounts to one-third of its total fossil fuel imports.

Kingsmill Bond, an energy strategist at think tank RMI who has been featured by Canary Media before, predicts that Putin’s aggression will catalyze the market conditions and political appetite for clean energy to displace fossil fuels. Bond presented his analysis at a recent RMI meeting; here’s a summary with excerpts, edited for brevity and clarity. (Canary Media is an independent affiliate of RMI.) 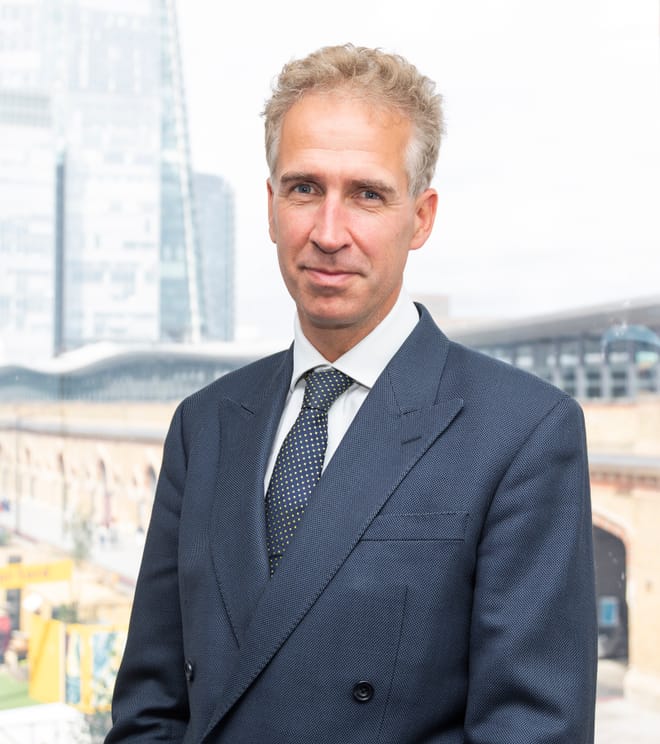 What’s happening with energy today is similar to the oil crisis of the 1970s, according to Bond — but the world is now better positioned to move quickly away from oil and gas. In 1973, OPEC stopped selling oil to the U.S. and a few other countries that supported Israel against a group of Arab nations led by Syria and Egypt in the Yom Kippur War. Here’s Bond:

The supply-side shock of Putin’s war will galvanize the same dramatic response as the 1970s oil shocks did. The difference this time is we’re prepared. We’ve got the renewable solutions. We have the political will. Putin’s war is the kind of catalyst that helps us break through inertia and barriers to change — and makes this energy transition happen.

What that means is 2019 was peak fossil fuels. And we have a real chance at net zero.

In the 1970s, OPEC’s share of primary energy supply was a similarly significant 25 percent, said Bond.

When you try and cut out something so big from the system, it inevitably creates a profound impact on pricing. You get this supply shock.

The shock in the ​‘70s had painful consequences for consumers in fossil-fuel-dependent countries.

In the short term, just like now, it was really damaging: the queues at the petrol pumps, the rationing. You had prices going up fourfold. So the reaction was even higher than we’re getting right now.

But that shock changed the course of history, according to Bond.

In the 1970s, under business as usual, demand would have carried on rising. In reality, it stagnated for 15 years.

Why did oil demand stop growing? Because of increased energy efficiency and huge growth in alternative energy technologies, according to Bond. Countries increasingly turned to nuclear power, and nuclear generation grew tenfold over the course of the next two decades, said Bond.

Today, he noted, ​“the world is profoundly different,” and we can expect even bigger changes.

We have got renewable energy technologies, which are already cheaper than fossil fuels in about 90 percent of the world. In 1973, nuclear was more expensive: $80 per megawatt-hour in 2020 terms, versus $50 per megawatt-hour for solar now.

Solar has been on a learning curve: The more solar we deploy, the cheaper it gets. The price of solar fell by 89 percent from 2009 to 2019. But nuclear never got on to a learning curve, said Bond.

Moreover, nuclear has to be very specifically sited, whereas wind and solar can be deployed in many more places.

Wind and solar are 100 times the size of fossil fuels in terms of the amount of energy potential. Anyone can deploy solar and wind in any major country in the world at scale.

Wind and solar have also achieved much broader adoption than nuclear had in 1973.

Nuclear was 3 percent of global electricity production — 200 terawatt-hours. Sun and wind are going to be 3,000 terawatt-hours this year; they’re just further up the growth curve. So change can happen much faster.

And people are hungry for change.

Sitting in Europe, you feel, viscerally, the anger and the desire to break the old way of doing things very, very quickly.

Putin’s war has galvanized people to accelerate an energy transition. Bond showed this poster to illustrate: 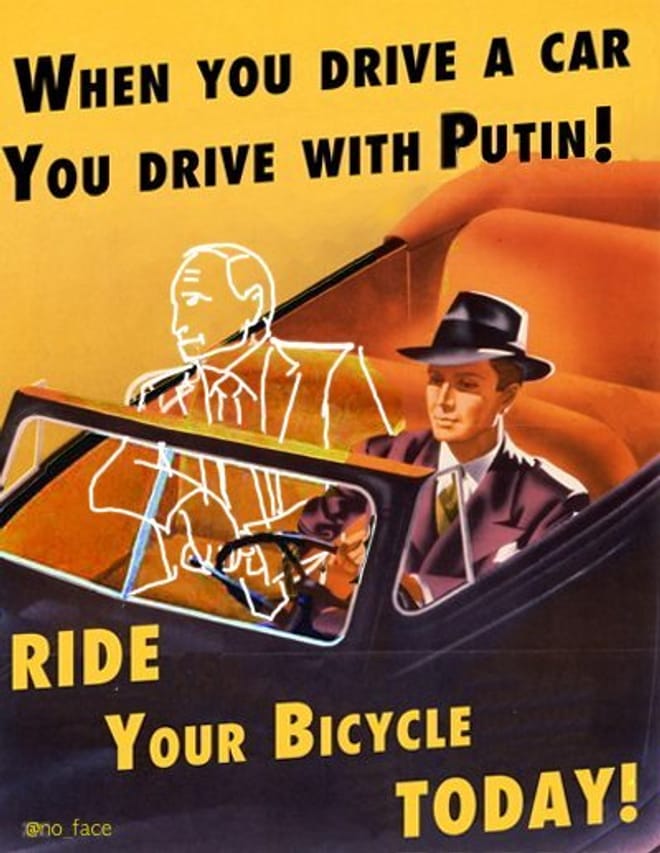 When you drive a car, you drive with Putin. That’s the kind of strength of feeling that is materializing here and now.

Within two weeks, the German government reversed decades of a realpolitik strategy: buying Soviet and then Russian gas to prevent a Russian invasion. The European Commission has been calling for getting Russian fossil fuels out of the system by 2027. These were things that a month and a half ago were impossible. Now, they’re happening.

As in the 1970s, Europe’s plans include renewable energy sources: ​“900 gigawatts of solar, wind, some biomethane, some massive fuel-switching,” said Bond.

They’re talking about 30 million heat pumps — in fact, that’s not very aggressive; it could be 100 million heat pumps by the end of this decade — quadrupling in hydrogen and electrification of industry, massive rollout of electric vehicles, and a massive increase in efficiency. What that means is that policy change will happen much faster. They’re going to speed up the permitting of renewables, increase the size of the grids, quadruple the size of the hydrogen economy and tighten up efficiency.

Failure to further deliver on these changes would be bad, not just for Europe, but for countries around the world.

This is a global phenomenon. As European buyers of energy go hunting for 50 billion cubic meters of gas across the world, they’re driving up gas prices in China and India — everywhere.

Only 10 percent of people live in the petrostates. Eighty percent of us live in countries that import their fossil fuels. So this is a global problem.

Europe spends about 3 percent of GDP on fossil fuel imports. In India, it’s 5 percent. In Jamaica, it’s over 10 percent of GDP. So this is a problem that has to be solved in many other countries.

I want to quote Martin Kimani, the Kenyan ambassador to the United Nations. He said, ​“We must complete our recovery from the embers of dead empires in a way that does not plunge us back into new forms of domination and oppression.” That’s, I believe, how people are now having to think — not just in Europe, but outside and globally.

So what will the future of energy markets look like? Bond said that Covid-19 has already given us a taste.

Before the Covid crisis, we were already looking at peaking fossil fuel demand in the mid-2020s. But it was a long plateau. Covid brought forward that plateau, but it didn’t really change the shape.

If you assume that what’s happening today is not just a one-off but is starting to sink into the way that policymakers are thinking, that means continued efficiency gains and faster renewable growth, as we saw in the 1970s.

These developments can be expected to have two major implications.

First of all, peak fossil fuel demand was indeed in 2019. Second, this energy transition will be fast, not a slow, leisurely period of change through 2030. It means immediate decline for fossil fuels.

It’s not outlandish to think peak fossil fuel demand is behind us, said Bond. In the U.S., it happened 15 years ago, he pointed out.

The reason why peaks matter so much is that financial markets operate at the margin. So investors are constantly hunting for turning points from growth to decline. And the fact that a system — getting energy from fossil fuels — is enormous makes no difference to the investor. What matters is whether it’s growing or declining. This is why Tesla can have a market capitalization greater than the capitalization of all the other automakers put together: People are betting on the growth.

The other reason peaks matter so much is that as soon as you shift from growth to decline, you get stuck with stranded assets. We saw this famously in Europe in 2007 when we had peak demand for fossil fuels in the electricity system. People were still building coal- and gas-fired power stations that they had to close down, sometimes even before they were ever switched on.

Financial markets have been pricing in these trends and derating fossil fuel stocks for quite a few years.

The fossil fuel sector says, ​“Well, this is great. Fossil fuel prices are high, so that means a massive supply-side response: more fossil fuels. The energy transition is over.”

As a result, Bond projects that the energy mix will tip rapidly toward solar and wind.

We have a chance of making this the decisive decade. We have the opportunity. We now have energy security strategists lining up behind the necessity for change. But it won’t happen unless we go out and make it.