As New York City works to reduce building-related carbon emissions, one 30-story apartment tower is proving you can trap and sequester carbon from gas boiler exhaust.

NEW YORK — Carbon capture at power plants has eluded cost-effective commercialization for so long that when a company pitched me claiming that it had achieved this at a New York City apartment building, I was skeptical.

But I like to be surprised, so I took the subway uptown to the 30-story high-rise across the street from Lincoln Center and met two executives from the startup CarbonQuest. We slipped in the service door to the rental apartment complex, took the elevator down into ​“the bowels of the building,” and entered a humid room where two industrial-scale boilers hummed noisily. This was the old world: The boilers burned fossil gas to create steam that heated the tower above us, just like you’d see in buildings across the city.

Then my guides took me through a door marked ​“Carbon Capture Room,” and we stepped into a vision of the future. CarbonQuest had tapped into the insulated duct that carries hot boiler exhaust to the chimney, diverting the flow through a circuitous array of hissing, humming machinery that pulls out moisture and isolates the carbon dioxide from nitrogen and oxygen, which get released back out the flue.

The carbon dioxide then gets cooled to a liquid state and stored, under pressure, in a metal tank. Eventually, a truck pulls up on the street outside, connects a hose to a nozzle on the side of the building, and sucks out the liquid carbon for delivery to a concrete factory, which will inject the greenhouse gas into concrete blocks, making them stronger.

“We love that because that was something permanent: We took our exhaust and rendered it inert,” said Josh London, senior vice president in charge of building operations at Glenwood Management, the privately held company that owns the 1930 Broadway apartment building and a couple dozen other rental properties in New York City.

The room-sized CO2-filtration and liquefaction system, installed early this year by CarbonQuest, is a rare instance of carbon capture that actually works and delivers an economic payback. Power-plant or industrial-scale carbon capture has a long history of disappointing results, even when attended to by the best minds at Chevron and Exxon. But the first system installed by CarbonQuest has been humming along for months; at its current scale, it catches 60 percent of the entire building’s gas emissions.

In New York City, buildings generate around 70 percent of carbon emissions, an outlier in a nation where transportation and electricity are the first and second biggest emitters, respectively, and buildings are responsible for just 13 percent overall. Heat pumps are gaining traction nationally and globally as tools to heat and cool homes without fossil fuels, but even climate advocates admit that today, it would be a tall order to electrify all the complicated high-rise buildings in cold climates, like the one towering above 1930 Broadway. 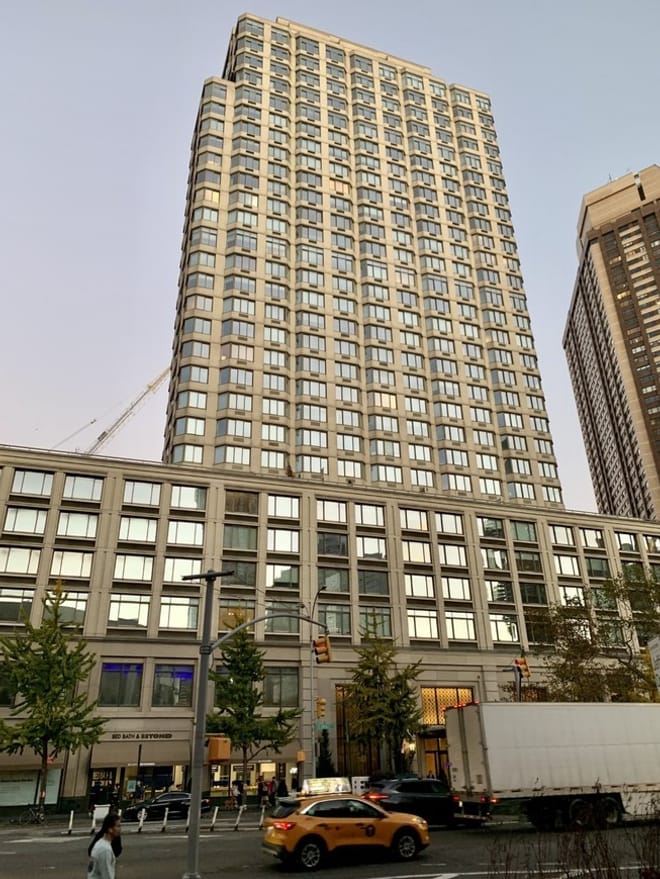 “The biggest challenge for cities is in the built environment,” said CarbonQuest President and CEO Shane Johnson. ​“This is not an easy problem. But it’s also the one that can make the most impact.”

From urban batteries to carbon capture

After working 27 years at Glenwood Management, London has learned that you can’t change a building’s energy infrastructure without considering unanticipated consequences. ​“When you pull one string, what happens to the other one?” he said in a recent interview.

The challenge for him is to do what’s possible to reduce the building’s impact on the environment, without jeopardizing the ability to keep residents warm in the winter.

The building management group started installing demand-response systems in 2001, and it remains open to testing new energy-efficient technologies. Years ago, a startup called Demand Energy Networks pitched the company on installing battery storage to reduce demand charges, and Glenwood ended up installing 16 units across its portfolio of rental apartments.

After several years pioneering battery installations in New York City — a thorny environment to operate in, with a thicket of fire-code and permitting restrictions — Demand Energy sold to Italian mega-utility Enel in 2017. A thriving distributed battery market has yet to take off in Gotham; for their next project, the Demand Energy entrepreneurs set out to find a different mechanism for reducing carbon emissions in the urban landscape.

Their search led them to the carbon-intensive heating systems that keep residents warm across dozens of stories when winter descends on the city. New York needs to do something about all those emissions to comply with its legally binding climate commitments. But swapping out entire heating systems for every major building in the nation’s largest city is a massive challenge. CarbonQuest’s founders went to the whiteboard and sketched out a more feasible concept: design a mechanism to bolt into existing buildings and snatch away the carbon emissions before they reach the sky.

CarbonQuest launched in June 2019 to do just that. The startup is helmed by a cadre of Demand Energy alums including Johnson, Brian Asparro and Doug Staker, and it is largely funded by the founders plus investment from friends and family.

“They came to us with credibility…they’re just top-notch engineers,” London said.

London opted to buy the first carbon-capture system and install it at 1930 Broadway, which opened in 2004 with what were state-of-the-art energy systems at the time. The twin Cleaver-Brooks four-pass boilers I saw in the basement were installed during construction; they have a minimum useful life of 25 years but can sometimes stretch to 30. The building has been upgraded with energy-management systems over the years — London described it as halfway between an old building and a brand-new one.

London looked into retrofitting the boiler at another building and found that electric boilers are not currently as efficient as gas. Then there’s the physical exertion required to remove what’s essentially a giant cast-iron barrel that was installed during construction because it’s larger than any doorway in the building.

“It is possible, but it is extremely impractical,” London said. ​“They literally come in and cut up the boiler, and the new one is put in piece by piece and welded onsite.”

CarbonQuest renders that headache unnecessary, from a carbon standpoint, at least. For one thing, installing the carbon-capture equipment is pretty quick and out of sight for tenants, and it only requires minimal downtime to tap into the exhaust system.

“We literally rolled up with semis, and it was in the building in like two days,” said Johnson. ​“Over a weekend, it was interconnected.”

By capturing emissions at their source, London expects to avoid penalties under Local Law 97. The law kicks in later this decade and will charge large building owners $268 per metric ton of CO2 emitted over a specified cap.

But Glenwood Management will supplement the avoided penalties with actual revenue from selling industrial-grade CO2 to customers. The greenhouse gas doubles as an industrial commodity used in everything from beverage production to medical treatment. The going rate for a ton of CO2 is actually higher than New York’s penalty per ton, London said.

“It absolutely does have a business case,” he said of the installation.

So far, Glenwood Management has sent carbon dioxide to Glenwood Mason Supply (no relation), which injects CO2 into its concrete mix, making stronger blocks while permanently sequestering the greenhouse gas via mineralization.

“We have no intention of selling carbon dioxide to somebody who’s not going to sequester it in some way,” said London. ​“We’re not selling any CO2 that’s going into oil wells. We’re not trucking it off and dumping it under the bridge.”

Now it’s up to CarbonQuest to convince other building owners to give them a chance. But the technology raises a deeper question: Where should carbon capture fit in among the various tools for decarbonizing buildings? Will it be welcomed by climate advocates who see electrification as the answer to fossil-fueled heating and cooking?

As far as initial customers go, London seems pretty pleased. He carved out a little patch of garage, paid an undisclosed amount for the machinery — and cut the whole building’s emissions by 25 percent. That’s much more impact than multimillion-dollar window replacements that net a few percentage points of improvement.

“It’s an R&D effort, but now that we see what the thing is capable of, we’d gladly give up space in other buildings to fit this in,” London said.

Still, there is a conceptual difference between a carbon-capture approach and the holistic, over-time transition framework RMI developed with New York state, dubbed ​“resource-efficient electrification.”

“At the end of the day, carbon capture is an added cost just for the reason of carbon reduction — you don’t get other types of performance improvement in your building,” Bridgeland said.

In other words, a building owner pays some amount of money to neutralize the planet-warming emissions but gets the same quality heating with the same amount of energy use. It remains susceptible to gas price spikes, like those that followed Russia’s invasion of Ukraine and the ensuing disruptions to gas flows in Europe that rippled through global markets.

London expects payback in six and a half years based on avoided regulatory penalties and sales to CO2 customers. In RMI’s framework, strategically timed electrification (meaning upgrades that take place when heating systems require an overhaul, for instance) eliminates emissions but also cuts energy costs through greater efficiency and improves comfort for residents.

Technologies like CarbonQuest’s could tackle near-term building emissions for however long it takes the electric options to mature. They could also complement air-source heat pumps when they lose efficiency in very cold temperatures.

There may be situations, Bridgeland said, where it could make sense to use heat pumps for a substantial amount of heating throughout the year, but maintain gas boilers for the coldest days. Adding carbon capture could eliminate the lingering emissions from that setup.

While the early test cases of high-rise electrification emerge, CarbonQuest is taking inbounds and pursuing its next customers. And it’s enjoying a first-mover advantage, while it lasts.

“At the building level, I don’t know if we have a direct competitor today,” Johnson said.

If you enjoyed this story, help us produce more like it. Donate to support Canary Media!