Plus, a Q&A with Karen Miao, Senior Director of Renewable Structuring at JERA Americas.

Karen Miao: A renewables expert with a knack for riding the solar coaster

Karen Miao is Senior Director of Renewable Structuring at JERA Americas. This interview has been lightly edited and condensed for brevity.

I’ve always endeavored to have a career that is not only interesting but also does some good. By the time I went back to school for my MBA, I had been looking at sustainability jobs. It was tough at that time, though — there would only be one person in an entire company who focused on sustainability, and the whole idea was new. But then I got an internship at Sharp Solar, and I got hooked, because solar is like a business case come to life. There’ve been so many industry changes in terms of policy and just overall economics. I’ve been on the solar-coaster ride for the last 14 years.

Think of your career as being less like climbing a ladder and more like climbing a jungle gym. There are different ways to make progress, and sometimes it does not turn out exactly the way you had planned. I’ve done a lot of different things that haven’t necessarily been related to renewables, and I didn’t always have a clear vision of how it was all going to come together. But even opportunities that you didn’t plan on or ones that you didn’t get can force you to take an alternate route or explore something that you hadn’t considered before. While it can be disappointing, I have often found later that those experiences forced me onto paths that ended up being really helpful. 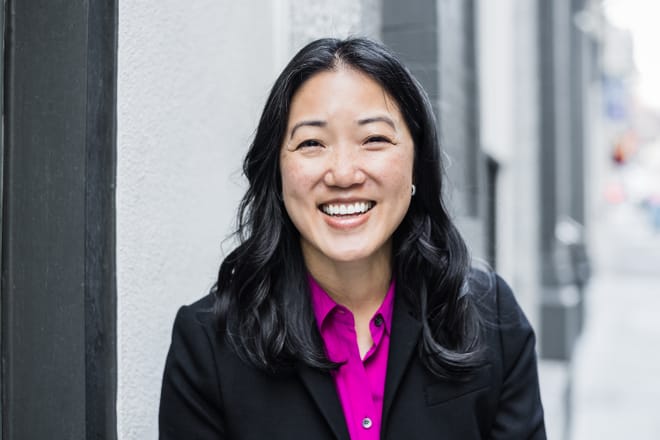 At times, I’ve felt like I didn’t have enough experience for certain roles, and honestly, it took a lot of putting myself out there, which is not something that comes very naturally to me. When I was trying to get into renewables, I was just showing up to conferences and walking the trade floor with my resume in my hand making contacts and asking for informational interviews.

As for barriers, I always felt uncomfortable asking for help because I was really new and was not sure what I had to offer. But that was something I needed to get over, and I was able to find people who were excited to help and wanted the industry to grow. Now it has come full circle, and I’m finding ways to help younger people coming into the industry, especially women and minorities. I try to pay it forward to others because a lot of people helped me.

One of the most exciting opportunities is in environmental justice. For a long time, the industry has been dominated by middle-aged white men with a certain perspective, and that has influenced the environmental movement.

It’s easy when you come from a place of privilege to say, ​“We should conserve this land,” or ​“People should reduce their carbon footprint and get an EV.” But when you live in a low-income area where there are no EV chargers and you don’t own your home, that is not accessible to you. There are just so many things that enable people with privilege to enter sustainability and environmental work and so many barriers that keep other people from doing the same. But now the environmental movement is becoming more representative, and there are some very exciting opportunities.

I am an excellent project manager. I am very organized, and I like planning and getting projects to the finish line. In school, they would call me Taskmaster Miao. On a personal level, wherever I am, I will find the best food or bakery. It is always on my mind. That’s the other half of my brain that’s not thinking about solar farms and wind farms and renewable energy and my work stuff.

Alison Mickey, previously with Fluence, is now managing director and head of marketing at Highland Electric Fleets, a firm that offers​“electric school bus subscriptions through 2025 at prices that put them at cost parity with diesel.” As Canary reported, Highland provides the buses and charging infrastructure, pays for the electricity to charge them, covers maintenance costs and manages any other details. Highland has raised $253 million in venture capital funding.

Frauke Kracke, most recently a senior staff scientist at the Stanford University School of Engineering, has joined the climate team at Stripe as science lead. The company provides a financial infrastructure platform for businesses.

Tanushree Agarwal, previously with Plus Power, is now manager of transmission strategy at the AES Corporation.

Alexandra Williams has taken a position as vice president of origination at Industrial Sun, an Austin, Texas–based utility-scale renewable energy developer. Williams, previously with ExxonMobil, has negotiated over 800 megawatts’ worth of renewable power purchases on behalf of industrial entities or as an intermediary. Katherine Valdelievre, previously with Apex Clean Energy, has joined Industrial Sun as vice president of real estate.

Stacy LaFrance, previously with Store Capital, is now the new chief accounting officer at Array Technologies. Array’s trackers will be used on the 690-megawatt Gemini project in Nevada, which will be the largest solar project in the U.S. when it’s completed.

Lindsay Vick, previously with NextTracker, is now director of marketing at PVcase, a maker of software for the design, estimation and optimization of commercial- and utility-scale solar assets.

Fei Wang is now head of market and customer intelligence at depsys, a provider of monitoring and analytical tools for distribution grid operators. Wang was previously with Wood Mackenzie.

Sandra Chavez, previously with Powerhouse, is joining venture firm Breakthrough Energy as a manager on its partnerships team.

Alessandra Kortenhorst, previously with Xynteo, is now project manager for energy and sustainability at Microsoft.

Katie Theoharides, who is currently secretary of energy and environmental affairs for Massachusetts, will soon be head of U.S. offshore development (East) for RWE.

Anna Siefken is now commercialization executive and energy education and empowerment (C3E) ambassador at the U.S. Department of Energy (on assignment from Carnegie Mellon University’s Wilton E. Scott Institute for Energy Innovation). Appointed by the Secretary of Energy, C3E Ambassadors are distinguished senior executives, academics, government officials and thought leaders who serve as role models and advocates for women in clean energy.

Annabelle Lee Sullivan, previously with engineering consultancy WSP, has taken on the position of director of operations at Nithio, an energy finance platform that provides services to distributed energy service companies, capital providers, governments and other stakeholders in the distributed solar energy sector in Africa.

London-based sculptor Cathy de Monchaux​’s early work was largely dominated by surrealistic objects that combine lush textiles with industrial metal elements such as spikes, studs and bolts. In recent years, her focus has shifted to panoramic forest tableaux imbued with a dark, foreboding sensibility, as seen in her 2020 triptych Wolf Moon.