Plus, a Q&A with Tani Brown, vice president of platform and operations at MUUS Climate Partners.

Tani Brown: A VP with a flair for abstract thinking

Tani Brown is​vice president of platform and operations at MUUS Climate Partners, an entrepreneurial investment firm operating at the convergence of climate solutions and high-tech applications.

I studied religion as an undergrad and started my career at Google during what I like to call the ​“golden age” of ad exchanges. Internet advertising was only just beginning to be measured, packaged and monetized, and I had the opportunity to launch my career with YouTube. It was an extraordinary time to be at Google and learn from top industry leaders. I wanted international work experience and eventually left Google to carry out a teaching Fulbright in northern Vietnam. It was a transformative experience for me because I saw the effects of education and career access on local economies.

When I returned to the U.S., I was intent on transitioning into public policy. I joined Jopwell in 2015 as employee No. 3, eventually building it into the leading career-advancement platform for Black, Latinx and Native American students and professionals and securing more than $12 million in venture funding.

At the end of 2021, I was tapped to join MUUS Climate Partners to lead their platform and operations functions. Everything I’ve done in my career seems to have led up to this moment. We were founded by serial entrepreneur Michael Sonnenfeldt and continue to reinforce a flexible, entrepreneurial approach to our funds. 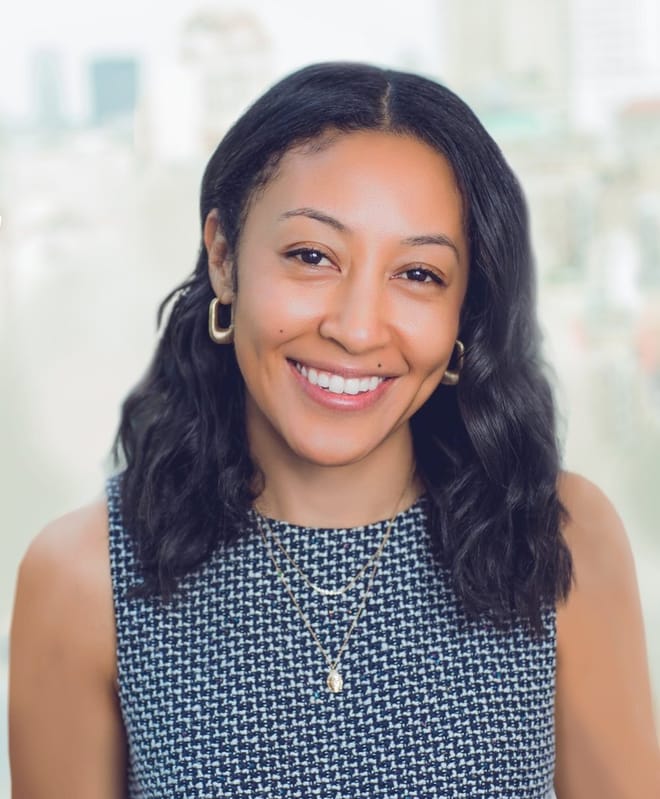 I have two. The first is, ​“It’s not who you know, but who knows you.” That was a nod to doing outstanding work and having impeccable character. Be the person others want on their team. When new opportunities arise, people will knock on your door or recommend you because they value your work. The second comes from my mother and it’s to ​“get rest.” Rest is central to my health and performance, and constantly restoring balance to my environment has been key to my growth.

I’ve had to deal with a lot of grief in the past 10 years. I lost my grandmother, uncle and mother all in the same year. It was awful. But I credit my closest friends, family and colleagues, plus therapy and exercise, with keeping my nervous system intact and allowing me to have good days and bad days.

On the portfolio side, I’m seeing a huge influx of sales-adjacent roles, technology-specific technician and installer roles, and environmental scientist roles. We’re also seeing a lot of academic institutions and corporations create schools for climate and chief scientist roles, which is incredibly exciting.

Abstraction. I try to take inspiration and practical working knowledge from a variety of disciplines such as painting, philosophy, martial arts, biology and more and apply them to my core function. Working in venture capital requires a lot of thinking slow and thinking fast, and knowing the difference between the two. I’m grateful for my team who sets the pace every day.

Sencelia Reynolds has been hired as chief operating officer for Perch Energy, a provider of community-solar services. Prior to joining Perch, Reynolds served as chief operating officer at service-contract administrator Centricity. Georgina Arreola has been promoted to vice president of policy at Perch Energy. Arreola has over a decade of experience in research and policy advocacy in the renewable energy industry, including a seven-year tenure at the Center for Sustainable Energy.

Felicia Kelly has been promoted to chief of staff at Alliance to Save Energy, an advocate for high-impact energy efficiency policies. She previously served as director of stakeholder relations at the organization.

Ellen Zuckerman is joining the Google energy markets and power team ​“to accelerate 24/7 clean energy” as the company’s Western U.S. lead of energy regulatory and policy. Zuckerman was previously with the Southwest Energy Efficiency Project.

According to Aalia Mauro, founder and CEO of Verte Mode, a sustainable fashion, beauty and zero-waste home goods marketplace, her company is in the early days of pitching to VCs. ​“I’m almost always the only woman in the room. And we are all very aware that the gender gap among founders and the funding received is still massive.”

Vivian Maier, who worked as a nanny and caregiver, took more than 100,000 detailed and richly evocative photographs in the streets of Chicago, New York and Los Angeles from the 1950s through the 1990s. Unknown as an artist during her lifetime, her vast portfolio was discovered after her death at a thrift auction house in Chicago. Learn her story and see more of her work here.