The first of 11 floating wind turbines in Equinor’s project off Norway is now generating clean electricity — which will be used to power an oil platform.

The world’s largest floating wind farm is now producing power off the coast of Norway.

Equinor, the Norwegian energy giant, said the first turbine of its Hywind Tampen project began power production in the North Sea last weekend. The company plans to install seven total turbines by the end of this year, with four more to follow in 2023.

All told, the 11 turbines will have 88 megawatts in combined capacity, Equinor said. That’s equal to more than half of all the floating wind capacity in place today.

“I am proud that we have now started production at Hywind Tampen, Norway’s first and the world’s largest floating wind farm,” Geir Tungesvik, Equinor’s executive vice president for projects, drilling and procurement, said in a statement on Monday.

About 56 gigawatts of offshore wind capacity was in place worldwide at the end of 2021. Of that total, only 121 megawatts — or 0.2 percent — involved floating turbines, the Global Wind Energy Council said in a June report.

A key reason why floating wind farms represent such a tiny slice of wind energy is that they’re more expensive and complicated to build than their fixed-bottom counterparts, experts say. The technology for bobbing turbines is relatively new, and the supply chain and port facilities needed to assemble the buoys, cables and multilegged platforms are still being developed. The two approaches to producing offshore wind might look the same above the water, but they differ significantly below the surface.

Yet in certain geographies, floating platforms might be the best or even the only way to generate electricity offshore. Governments are boosting support for floating wind farms as they seek to rapidly slash greenhouse gas emissions and limit global warming.

In the United States, the Biden administration aims to deploy 15 gigawatts of floating offshore wind capacity by 2035 — much of which will likely be installed off the coast of California. In September, the White House announced a Floating Offshore Wind Shot to ​“accelerate breakthroughs across engineering, manufacturing and other innovation areas.”

And in the United Kingdom, the Crown Estate plans to lease swaths of seabed controlled by the British monarchy for offshore wind development, with the goal of bringing 4 gigawatts of floating capacity to the Celtic Sea by 2035.

Equinor has been leading on floating wind development since 2009, when it installed the world’s first floating turbine off the coast of Aberdeenshire, Scotland. The company is majority-owned by the Norwegian government and changed its name from Statoil to Equinor in 2018. After floating the first turbine, Equinor added four offshore turbines to complete the 30-megawatt Hywind Scotland pilot project, which Equinor says is the world’s first commercial floating offshore wind farm.

With the Hywind Tampen project, the company is expanding into its home waters.

But if the project’s first spinning turbine marks an important milestone for the emerging sector, it also has an ironic twist: The wind farm will provide clean electricity to power operations at two offshore oil-and-gas developments. This will enable Equinor and its partners to produce more fossil fuels — one of the leading drivers of human-caused global warming.

The wind farm is expected to meet about 35 percent of the fields’ electricity demand, reducing CO2 emissions by about 200,000 metric tons per year, according to Equinor.

“Hywind Tampen cuts emissions from the oil and gas industry and increases the gas export to Europe,” Kjetil Hove, Equinor’s executive vice president for exploration and production in Norway, said on Monday in a statement. ​“This is an important contribution toward transforming the Norwegian continental shelf from an oil and gas province to a broad energy province.” 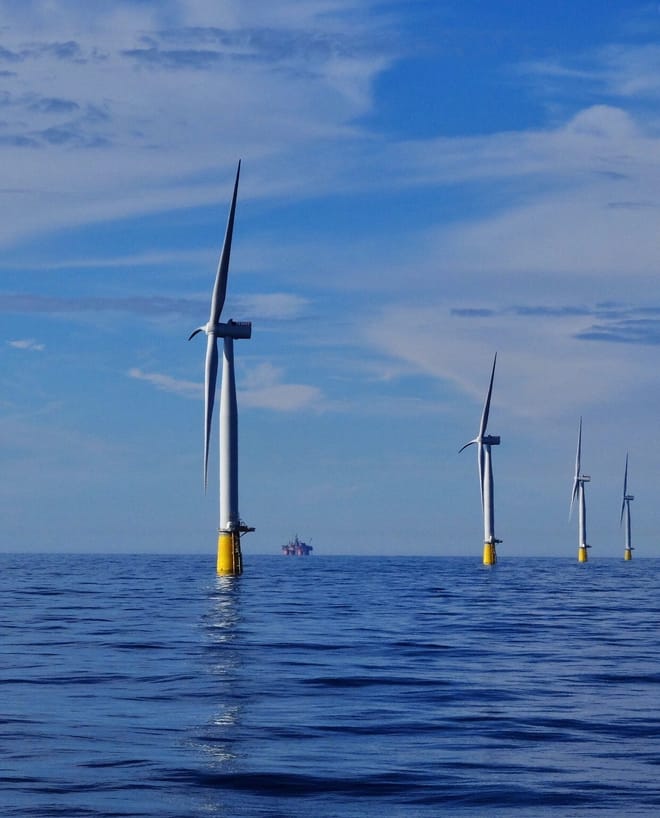 The floating turbines in the foreground will help power the oil platform in the background. (Sergi Montané)

Still, combining floating wind farms with offshore oil-and-gas development does have certain technical advantages. Many of the technologies needed to hoist turbines in deep waters are being adapted from the fossil fuel industry. And the specialized vessels that deliver supplies, transfer crew members and serve as floating hotels for offshore oil-and-gas operations are the same ones being used to service wind farms.

Tungesvik of Equinor said the company and its partners ​“are building a new industry on the shoulders of the oil-and-gas business, utilizing the competencies we together have acquired over many decades.”