Renewables, DERs and EVs are still top priorities for utility commissions, but extreme weather and Covid-19 are also shaping regulatory action in 2021.

Noah Garcia is a policy principal at Advanced Energy Economy, an industry association for clean energy companies. This guest essay represents the views of the author, not those of Canary Media.

Although 2021 is only halfway over, state utility regulators and regional grid operators have had their hands full grappling with issues at the cutting edge of the energy transition. How can utilities develop resource plans that align with state policy goals? How do all those mobile batteries in the growing fleet of electric vehicles (EVs) integrate with the grid? How can customers get the support they need to make smarter energy decisions?

These questions and more are on utility regulators’ dockets in 2021, and Advanced Energy Economy has been tracking how regulators are tackling them. Already, the regulatory trends from across the country suggest that 2021 will be another transformational year. (You can read AEE’s full version here, with links to specific proceedings.)

According to the U.S. Energy Information Administration, nearly 70% of new large-scale capacity additions in 2021 will come from renewables, including a record 15.4 gigawatts of new solar. In March, Xcel Energy in Colorado filed its inaugural Clean Energy Plan to support a goal of an 80% reduction in power-sector greenhouse gas emissions by 2030. In May, Indiana regulators approved Northern Indiana Public Service Co.’s request for 900 megawatts of new solar capacity under its 2018 integrated resource plan. In the Southwest, Arizona’s Energy Rules proceeding has been a regulatory roller coaster, but the Arizona Corporation Commission has set the stage for a vote in the fall that would require regulated utilities to achieve 100% clean energy by 2070 with interim targets. Other states such as New York, North Carolina, Michigan, Nevada, California and Washington all have active dockets on the procurement of new renewable resources. 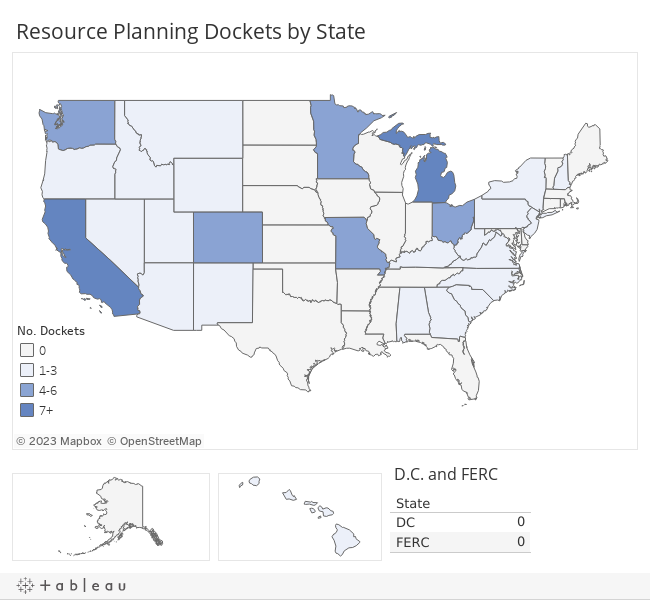 Regulators across the country are exploring how distributed energy resources (DERs) such as rooftop solar, storage, energy efficiency, EVs and demand response can provide more grid and customer benefits. Nowhere is the discussion more active than in California. The California Public Utilities Commission approved a new pilot for utilities to procure and compensate behind-the-meter DERs that avoid or defer distribution system upgrades. It also adopted a new metric that captures the grid benefits provided by efficiency and continued to oversee a hotly contested process to update the state’s net-metering rules. The CPUC will also soon initiate a major proceeding to prepare for an energy future defined by high levels of DERs. Other state commissions evaluating ways to bring DER value to the grid include those in New York, Massachusetts, Colorado, Maryland, Michigan, Minnesota, Arizona, Oregon and Hawaii. 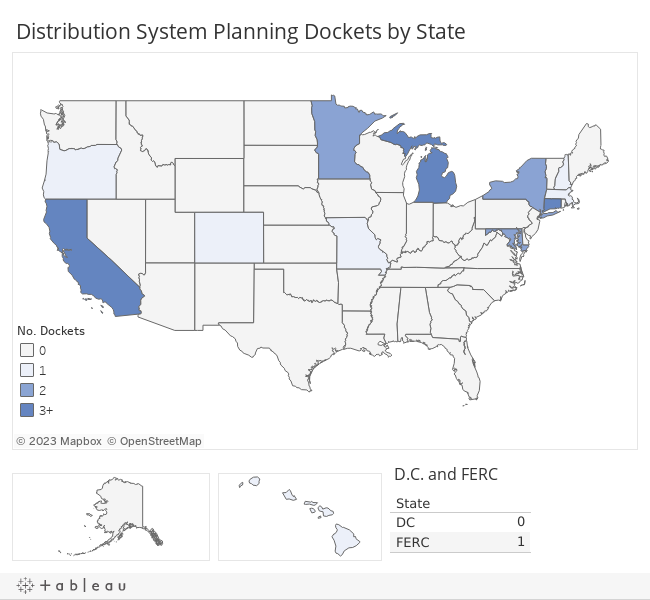 Transportation electrification continues to be a hot topic among utility regulators. According to Atlas Public Policy, public utility commissions have approved more than $2.6 billion in utility EV programs so far. In Michigan, DTE Energy recently received the green light to implement the second phase of its Electric Vehicle Charging Forward program, providing new opportunities for customer education and outreach, fleet advisory services and EV charging station deployments. Minnesota regulators also recently approved utilities’ 2020 Transportation Electrification Plans and set new requirements for future plans to integrate EV demand onto the grid. California continued to set the bar by approving new rates that support the economic operation of fast chargers, authorizing a new program to deploy more than 2,000 new EV chargers at apartments and workplaces, and laying the groundwork for $240 million in fast-tracked investments to support charging needs of apartment dwellers, low-income residents and other priority groups. In Maine, Central Maine Power sought to push the boundaries of transportation electrification on the water by proposing a pilot to support the electrification of ferries in the region. Other states, including New York, Maryland, Florida, Colorado and Arizona, have also had active dockets on transportation electrification this year. 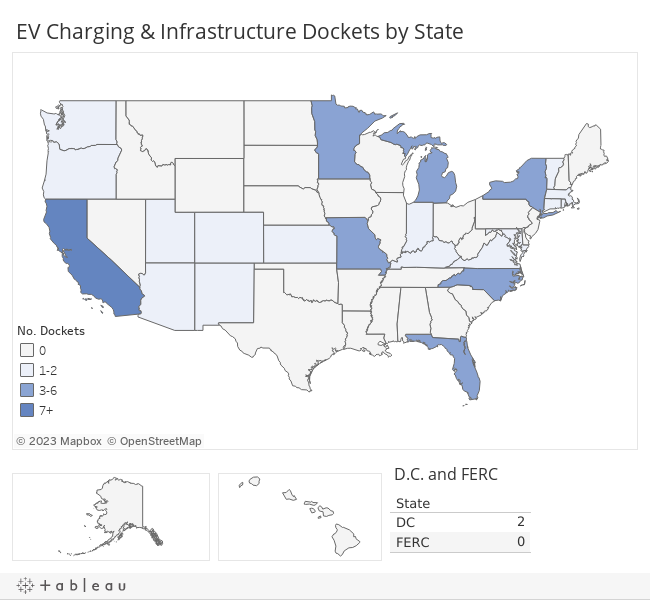 There has been much debate over the last several years around decarbonizing buildings and the future of the natural gas system, and that debate has been heating up this year. So far in 2021, Colorado regulators continued their proceeding on decarbonization of the natural gas system as they prepare for utilities to file new electrification plans in accordance with legislation passed this session. The Public Utilities Commission of Nevada plans to open a new proceeding on long-term gas planning in that state. After California’s landmark 2020 decision to establish $200 million in utility beneficial electrification programs, the California Public Utilities Commission continues its proceeding guiding future policies and rules for gas planning; it will conclude in 2022. Utility commissions in Massachusetts, Connecticut, Illinois, Wisconsin and Oregon are also overseeing proceedings that have planning implications for building electrification technologies.

Well-designed wholesale electricity markets can be a powerful driver for advanced energy development. As states look to reduce utility customer costs, enhance system reliability and meet policy goals, regional transmission organizations and independent system operators serve as critical tools for enabling the efficient use of transmission and generation resources. In the Southeast, several major utilities submitted an application to the Federal Energy Regulatory Commission for a new Southeast Energy Exchange Market. SEEM would enable trading of wholesale power among utilities at 15-minute intervals; however, the concept falls short of the typical transmission organization structure, lacks mechanisms to ensure market transparency and leaves potential customer savings on the table. In the West, interest in a regionwide market is growing, as evidenced by recent legislation in several states, as well as ongoing commission investigations in Colorado and Nevada. States in the territories of ISO-New England and PJM have also continued to discuss concerns about discordance between market rules and state clean energy policies. Last but not least, FERC has teamed up with the National Association of Regulatory Utility Commissioners to establish a federal-state task force on electric transmission to optimize benefits of new transmission and fairly allocate costs — critical issues for sharing large-scale renewable resources over wide areas of the country.

A major winter storm in Texas and extreme heat in California were two prime examples of extreme weather this year. Both events underscored the need for flexible, resilient supply-side and demand-side resources that protect customers from prolonged grid disruptions. Amid the regulatory upheaval that took place at the Public Utility Commission of Texas after the winter outages, regulators opened dockets on a wide range of issues stemming from the crisis, including a service disconnection moratorium, weatherization standards, indexed retail electricity plans and ERCOT’s scarcity pricing mechanisms. Moreover, the Texas legislature passed 25 bills that require commission action on an even wider array of issues to shore up system reliability. In the wake of last summer’s regionwide heat wave, California regulators opened a proceeding in the fall of 2020 to address near-term reliability issues. These actions are already having an impact this year: California’s grid operator noted that new demand-response and battery-storage resources helped to keep the lights on during a mid-June heat wave. FERC and states including New York, Arkansas, Colorado and Oregon are also grappling with dockets concerning system resilience and impacts of grid disruptions caused by extreme weather.

With an increasing number of states aiming for 100% clean energy and moving toward that goal by adding variable renewables, regulators are beginning to search for solutions that ensure zero-carbon energy is available around the clock. While battery storage can be used to meet short-term capacity needs, there is growing interest in zero-carbon technologies that can provide capacity and other grid services for extended periods of time. In California, the CPUC issued a groundbreaking decision in June to procure 11.5 gigawatts of new resources by 2026, of which at least 1 GW must be long-duration energy storage and at least 1 GW must come from ​“clean firm” resources such as geothermal power. In New York, grid operators are modeling the use of renewable natural gas and hydrogen from electrolysis at existing gas-fired plants. Evergy’s latest integrated resource plan in Missouri anticipates procuring nearly 4.5 GW of renewable and ​“zero-carbon firm, dispatchable” resources by 2040. Regulators in Massachusetts, Colorado and Nevada are also looking at demonstrating, procuring or studying zero-carbon firm resources.

8. Pandemic-related restrictions on power disconnections expire, but costs are looming

At the time of AEE’s last top 10 regulatory trends post in December 2020, half of U.S. states had some form of disconnection moratorium in place and many had opened dockets to address near-term challenges for utilities and their customers due to Covid-19 impacts. Today, states continue to grapple with pandemic-related issues, including customers behind on their payments and utility cost recovery. The situation is particularly acute in New York, where the total sum of overdue bills across regulated utilities has grown to approximately $2 billion. States such as Massachusetts have continued to extend disconnection bans into the summer, while others, including Texas and Wisconsin, have ended the bans but continue to require regular reporting on utility finances and management of overdue bills. Given the lingering pandemic’s financial impact on customers and utilities, 2021 may see a ramp up in rate-case activity as utilities seek to recover costs. 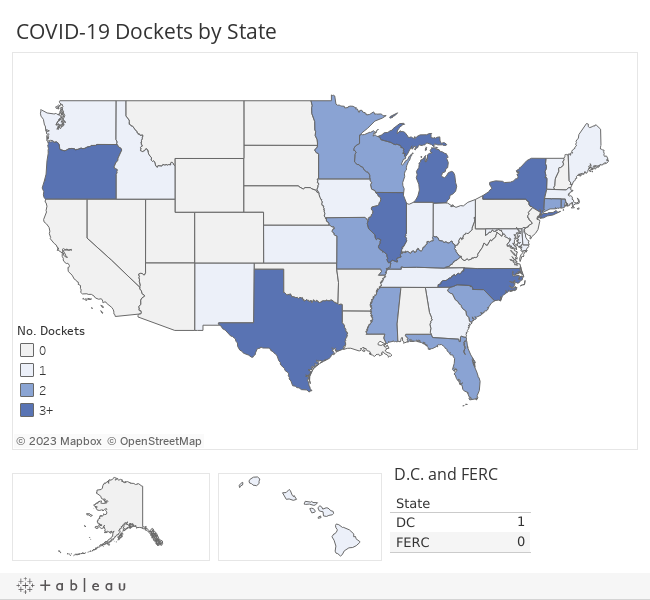 As the grid becomes smarter and more distributed, increased access to data can help consumers make informed energy decisions and give third-party companies the chance to unlock more value from customer-sited DERs. In Washington, D.C., regulators recently issued a decision that requires Pepco and Washington Gas to issue customer home energy reports — similar to existing reports in Maryland and other states — that display detailed usage data as well as associated greenhouse gas information. New York took a big step by requiring the creation of an Integrated Energy Data Resource as a one-stop shop for energy-related data in the state. Colorado is also considering data-access issues in a new proceeding that may amend Xcel’s Advanced Grid Intelligence and Security initiative to allow third-party energy management companies to access customer energy data. Other states, including Maryland, Minnesota and California, also have active dockets on data access. 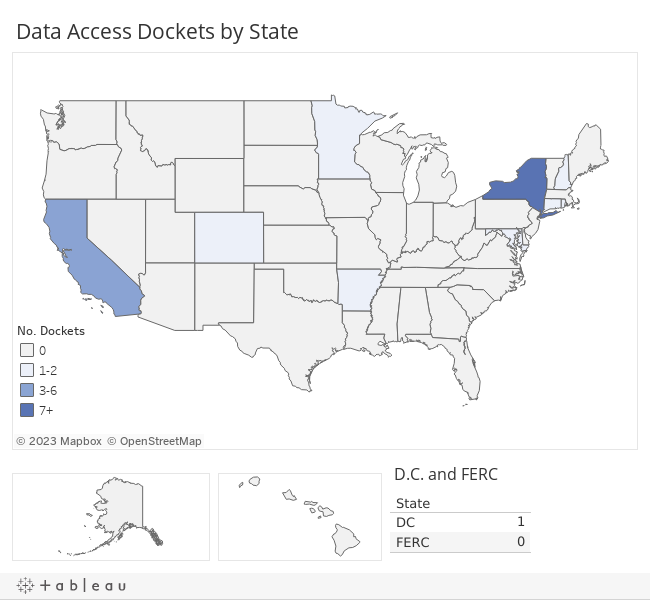 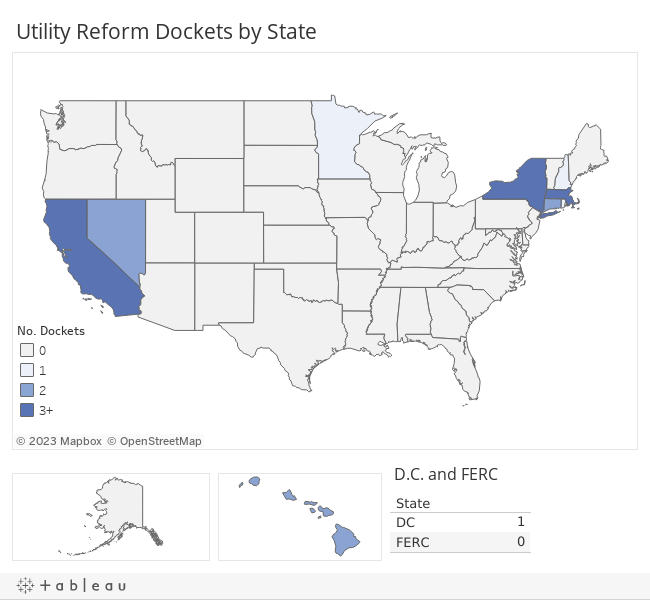