Construction has begun on the 339-mile Champlain Hudson Power Express, which will deliver Canadian hydropower to NYC as the city retires fossil fuel plants.

Work has begun on a high-profile transmission project that will funnel clean power directly into New York City.

The buried cables will deliver 1,250 megawatts of hydropower from Canadian utility Hydro-Québec, beginning beneath Lake Champlain, moving underground near Schenectady and Albany, then running below the Hudson River until eventually connecting to a new converter station in the Astoria neighborhood of Queens.

Transmission Developers, Inc. — the aptly named company owned by private equity firm Blackstone — is developing the high-voltage direct-current transmission (HVDC) line, which is expected to cost $4.5 billion and be fully operational by the spring of 2026.

The project will play a critical role in keeping the region’s grid running smoothly over the next decade, according to the New York Independent System Operator. In a new report, also released on Wednesday, the grid operator warned that the state’s efforts to retire fossil fuel plants and electrify buildings and vehicles could threaten the future reliability of the electric grid — unless planned transmission and power generation projects move forward.

“The reliability of the New York City area faces the greatest risk, due to limited generation and transmission to serve forecasted demand,” according to the report.

The Champlain Hudson Power Express is one of two major HVDC lines to receive approval this year from the Public Service Commission, the state’s utility regulator. The second project is an $11 billion initiative called Clean Path New York that would bundle a 174-mile transmission line with about 3,400 megawatts of new wind and solar capacity. 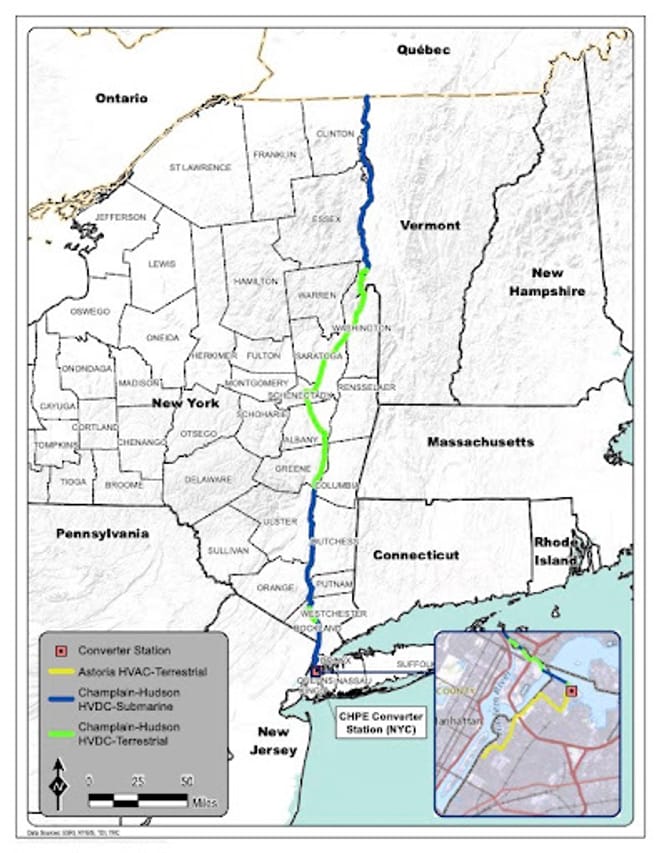 Upstate New York and neighboring Canadian provinces produce ample amounts of renewable energy, including from hydropower, wind and solar projects. But downstate, New York City’s 8.5 million residents still get most of their power from fossil fuels. About 85 percent of the city’s electricity supply comes from oil- and gas-fired power plants, many of which are built in disadvantaged communities that suffer from disproportionately high levels of air pollution.

As utilities retire polluting facilities, they’ll need to replace that dirty power with cleaner sources. At the same time, efforts to heat more homes and buildings using electricity — not gas-fired boilers or heating oil — will further boost clean-energy demand, as will the shift to using electric cars, school buses, delivery vans and e-bikes.

Governor Hochul said the Champlain Hudson Power Express is ​“a monumental step toward protecting our environment and creating family-sustaining green jobs in both upstate and downstate New York.” She spoke from a groundbreaking ceremony held in Whitehall, New York, a town near the Vermont border where some 17.6 miles of the transmission line will be buried.

The 339-mile transmission line is expected to deliver enough electricity to power more than 1 million homes and to reduce carbon emissions by 37 million metric tons statewide, according to the governor’s office.

Even so, the project has faced opposition from some environmental groups in the state. Earlier this year, the nonprofit Riverkeeper asked regulators to reject the Champlain Hudson Power Express project, arguing that Canadian hydro dams and reservoirs are ​“far from emissions-free” and have a ​“long, devastating history of destroying rivers and damaging Indigenous communities.” Riverkeeper also warned that burying transmission lines beneath the Hudson River could tear up habitat ​“in one of the world’s most productive estuaries.”

Other environmentalists, however, voiced strong support this week. ​“Delivering clean energy 300 miles to New York City — and delivering 1,400 union jobs in the process — is an Empire State–size feat we should all be proud of,” Julie Tighe, president of the New York League of Conservation Voters, said in a statement.

If you enjoyed this story, help us produce more like it. Donate to support Canary Media!