After disasters like Hurricane Fiona, solar panels and batteries can be a lifeline. Energy experts offer some do’s and don’ts to help make the most of backup systems during outages.

With catastrophic storms and wildfires continuing to pummel power grids, many more people are adding home batteries to rooftop solar arrays to provide backup power during lengthy outages. As Puerto Ricans saw after Hurricane Fiona and Floridians after Hurricane Ian, even smaller solar-plus-battery setups can be a lifeline when the power goes out.

But setting up these systems with the aim of maintaining power during blackouts requires a different approach than setting them up to, say, lower household utility bills or get paid to provide excess solar power during the grid’s high-demand hours. Projects meant to power a home’s most essential appliances for days, weeks or months require more upfront planning as well as real-time juggling between a family’s energy needs, the battery’s charge level, and the amount of sunlight on a given day.

“It’s like you’re running your own little nanogrid in your house,” said Javier Rúa-Jovet, the chief policy officer for the Solar and Energy Storage Association of Puerto Rico, an industry group.

Rúa-Jovet, who lives in San Juan, relied on his own system on and off for weeks after Fiona knocked out Puerto Rico’s entire electric grid on September 18 — almost five years to the day after Hurricane Maria razed the U.S. territory. Many other Puerto Rican families used modest solar-plus-battery setups to refrigerate insulin, operate home hospital beds, or charge laptops and cellphones.

“We have growing concerns about electric reliability in the United States, and these have been growing because of climate change,” said Will Gorman, a graduate student researcher at Lawrence Berkeley National Laboratory in California — a state where utilities occasionally shut off grid infrastructure to avoid the risk of sparking wildfires in the warming, drying region.

Given the increasing demand for solar-plus-battery systems, Gorman and fellow researchers recently analyzed how the technology might perform over a three-day blackout in different climates and various scenarios for a new study. ​“At a top level, we found that for the majority of the United States, solar-and-storage can provide backup power pretty reliably,” he said.

More specifically, solar panels paired with a standard-sized, 10-kilowatt-hour battery could meet a home’s critical electricity needs over three days. That can include powering fridges, lighting, internet service and well-water pumps for a single-family detached home. Systems with a 30-kilowatt-hour capacity could also power heating or air conditioning, though not consistently in all places.

“A customer might be hearing claims that all you need is a 10-kilowatt-hour system and your [entire] home’s going to be great,” Gorman said. ​“We wanted to communicate what the capabilities and limitations of these systems are in a particular region.”

How a project performs ultimately depends on how well it’s designed before the grid goes dark and how effectively it’s managed after. Here’s some general guidance from energy experts on adding home batteries for backup power.

Plan ahead and lean large

According to Fidel Neverson, the best place to start is with a good old-fashioned spreadsheet. Neverson manages clean-energy projects in the Caribbean region for the think tank RMI, and he lives in St. Vincent and the Grenadines. (Canary Media is an independent affiliate of RMI.)

Home and business owners who want to add new solar-plus-battery systems should sit down with prospective installers and take a detailed accounting of their electricity loads — what hours they use certain appliances, how often and for how long — to better understand how much daily backup power they’ll need during an extended outage. Then, estimate how much solar energy it would take to meet those requirements in the least-sunny scenarios: in the rainy season, during winter months or on the cloudy days that often follow hurricanes.

“I always prefer to be extremely careful and not make the system too small [just to save] the customer money,” he said, because ​“then when they have a long-term grid outage, the system can’t provide them with their energy needs.”

Neverson said another consideration is how well the technology will perform as it ages and gradually generates and stores less power over time. That might mean designing a system to be larger than is needed today so it can still fully power critical loads five or 10 years down the road. He also recommends designing the battery system to be able to operate independently for 24 hours without needing to recharge from the solar panels.

While a more cautious approach like this will be more expensive for the homeowner, ​“It gives you a little bit more security in terms of reliability when you have a long-term outage,” he said.

Still, there are ways to limit the size and expense of a battery backup system. Households can proactively choose which circuits receive electricity when the system’s in backup mode by adding a secondary electrical panel at the same time the battery system is installed. Only critical energy loads are connected to that panel, while circuits feeding less-essential appliances like washing machines and deep freezers remain hooked up to the original panel.

A newer, albeit costlier, option is to swap in a smart electrical panel, which allows owners to decide in real time which household circuits will receive power from their solar panels, battery or the grid.

Be hands-on with battery management

In normal times, solar-plus-battery systems can essentially run themselves. But after a hurricane, windstorm or cold snap — or when a wildfire looms or a creaky grid crumbles — the system’s owner will need to play a much more proactive role. Most batteries include a smartphone app that allows users to monitor how much electricity their solar panels are producing, how much the home is consuming and how much battery charge is available.

Solar advocate Rúa-Jovet said he checked his app constantly in the days after Hurricane Fiona. His house in San Juan has solar panels and a 13-kilowatt-hour Tesla Powerwall battery, which his family used to energize two refrigerators, LED light bulbs, fans and a television during the prolonged grid outage.

Made it ‘till morning again with #solarplusstorage.

Once, he ran an air-conditioning unit overnight and nearly drained the battery.

“I don’t want to say the word ​‘addict,’ but you have to look at [the app] constantly,” he said. ​“You get very smart about being efficient and conserving your electrons, and turning off things that you don’t need.”

Some households in Puerto Rico did deplete their batteries overnight in the wake of Hurricane Fiona, after heavy rain and dense clouds engulfed the island for days. Their batteries dipped below the ​“critical charge” level needed to get the solar-panel system working again once sunlight returned. Solar installer Sunnova said it sent crews of technicians to jump-start customers’ inverters using a high-capacity portable battery so they could resume harnessing and storing solar energy.

To avoid that scenario, Rúa-Jovet suggests programming the battery to only use up to 95 percent of its power for backup, leaving the other 5 percent for the battery’s emergency reserve levels. 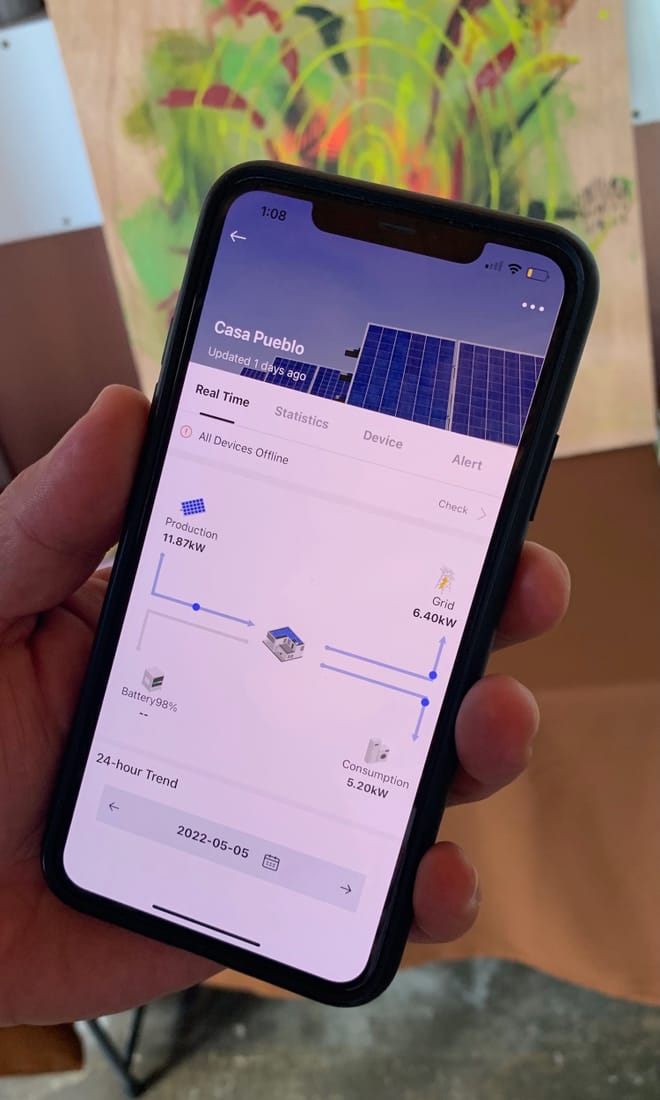 Of course, cell towers and Wi-Fi networks can fail during disasters, cutting communication between the battery and the app. In that scenario, the battery’s near-field communication equipment can convey its charge levels directly to a smartphone.

Many other factors will determine what size of solar-plus-battery system a family needs and whether it will actually keep the lights on during a grid outage that lasts for days or even months.

“How energy-efficient the home or building is — and also this move toward electrification — can really have a big impact on the outcomes,” said Galen Barbose, a research scientist at Berkeley Lab and a co-author with Gorman of the recent study.

A well-insulated house with an electric heat pump, for instance, will need less backup power than a drafty home with energy-guzzling electric resistance heating, he said.

Once a solar-plus-battery system is hooked up, it’s important to consider how future actions — such as switching to electric appliances or adding an extra fridge — will affect the careful calculations made before the system installation. If a family replaces its gas-burning stove or heating system with electric versions, that will alter the overall performance of the backup unit and might make a family want additional battery capacity. That offers yet another reason to err on the side of a larger battery system at the outset if budgets allow, RMI’s Neverson said.

Buying an electric vehicle can also influence the equation. On the one hand, it’s a large new electricity load. But with the right charging tools in place, an EV battery can also be used to power a home during a blackout. Ford claims its electric F-150 Lightning pickup truck can, if fully charged, power an entire home for about three days.

All these caveats and calculations might seem dizzying or even stressful to consider.

Rúa-Jovet said it pales in comparison to the anxiety he felt after Hurricane Maria struck Puerto Rico in 2017. His house had solar panels but not battery backup, so his family relied on a propane generator for more than a month. ​“I was one of the lucky ones,” he said, noting that some families went more than a year without electricity. He said he spent about $4,000 on fuel, which was often hard to come by.

“I remember the smell of gasoline and the fumes,” he recalls. ​“My whole stomach and heart would be on edge whenever the generator made noises because I thought it meant it was going to shut down, and then I’d have to go out in the rain at night and deal with something that I didn’t know anything about.”

“You don’t think that way with solar and storage,” he added. ​“You start looking at your app and you know exactly what’s going on, and you’re reassured.”