A sea change is underway as global shipping players adjust to the new normal of a rapidly warming planet.

Five years ago, when I first attended the Connecticut Maritime Association’s annual conference, the global shipping industry had no clear-cut plans to curb its greenhouse gas emissions, and the Trump administration was actively working to undermine U.S. climate policy. On the bright side, record numbers of idling ships weren’t clogging crowded ports, and everything from T-shirts and computers to iron ore and fertilizer flowed seamlessly across the oceans.

This week, when I stepped inside the same carpeted ballroom in Stamford, Connecticut, it felt as if the script had flipped. The global supply chain is now in disarray, and climate change is a major topic of concern.

At the event, maritime industry leaders and business executives urged companies to clean up the oil-guzzling vessels that haul trillions of dollars’ worth of goods each year, and they pushed shipowners to start testing zero-emissions fuels. U.S. officials announced plans to improve America’s ports and waterways, both to reduce emissions and to fortify infrastructure against the effects of climate change, including more frequent flooding.

(Want to dive deeper on the decarbonization of the shipping industry? Check out my conversation on the Climate Now podcast with hosts James Lawler and Darren Hau. You can listen to the episode here.)

“We are seeing unprecedented demand and volume of goods, and all of this is occurring largely on generations-old infrastructure,” Lucinda Lessley, acting administrator of the U.S. Department of Transportation’s Maritime Administration, said in her keynote address on Tuesday. 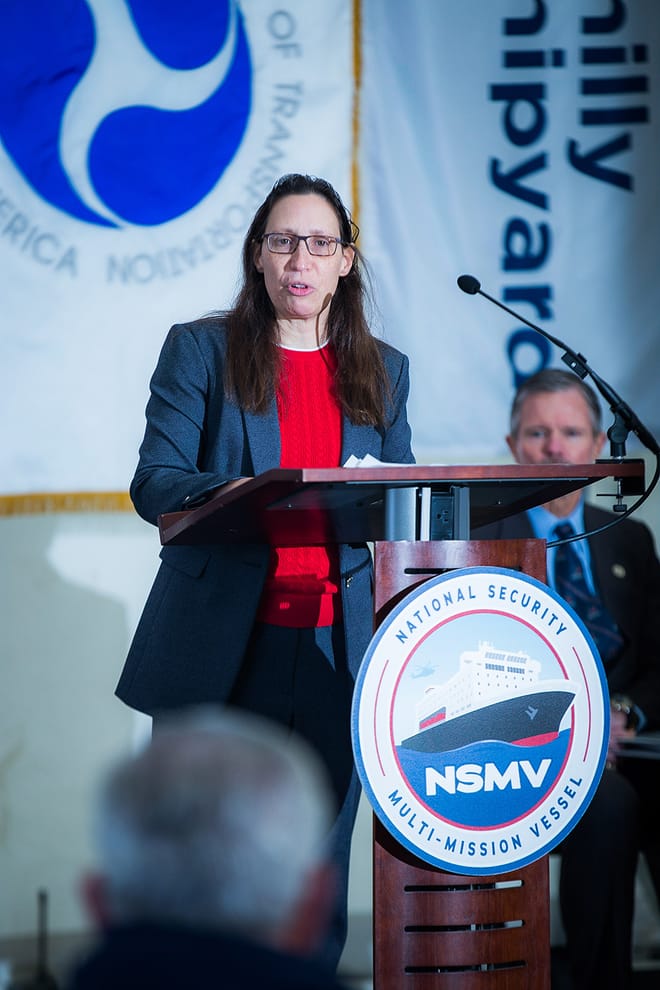 She noted that the $1.2 trillion infrastructure bill President Biden signed last year includes $17 billion for improving U.S. ports and waterways. Some of that money could help electrify the diesel-burning trucks and equipment that haul cargo in and around ports, as well as expand electrical charging infrastructure so that ships can cut their engines and plug into the grid while shoreside.

At the same time, the shipping industry is grappling with other challenges that will sound familiar to anyone who’s waited months for a new couch to arrive, or to companies that need semiconductor chips and metals to make batteries and solar panels. The Covid-19 pandemic sent shockwaves through global supply chains, causing bottlenecks and shortages that continue more than two years on.

More recently, Russia’s attack on Ukraine is disrupting trade flows in new ways and — more distressingly — has left more than 1,000 sailors stranded in Ukrainian ports on ships that are quickly running out of supplies. Worldwide, seafarers report feeling increasingly stressed and depressed as turmoil and Covid-related precautions keep them on ships for longer periods of time.

A growing focus on shipping’s climate toll — and possible solutions

All of these disruptions have only recently made it clear to the wider public just how much our daily lives depend on giant ships and on the people who live and work on these vessels. But scrutiny of the shipping industry and how it contributes to climate change has been building for years among environmental groups, regulators and retailers.

International shipping accounts for nearly 3 percent of global greenhouse gas emissions every year. That figure is projected to climb in the coming decades if freighters and tankers continue burning fossil fuels as they carry even greater volumes of cargo.

In 2018, a year after I attended my first Connecticut conference, the International Maritime Organization established landmark goals for curbing the industry’s greenhouse gas emissions. The United Nations agency aims to cut shipping-related emissions in half by 2050 compared to 2008 levels and fully decarbonize shipping by the end of the century.

It’s still uncertain exactly how large, ocean-crossing vessels — the biggest fuel consumers and heaviest polluters among ships — will meet those targets. Companies and governments in the Asia-Pacific region, Europe and, to some extent, the United States are investing in alternative fuels, including ammonia, hydrogen, methanol and biofuels. Meanwhile, available technologies such as high-tech sails, data-driven planning tools and shoreside charging infrastructure can help ships start curbing emissions today.

“We are likely moving toward a fuel multiverse” and away from the era of diesel’s domination, said Knut Ørbeck-Nilssen, the CEO of maritime for DNV, a Norwegian firm that classifies and certifies ships for safety.

He listed liquefied natural gas (LNG) among potential fuel alternatives, given that it produces lower carbon dioxide emissions on board compared to marine diesel fuels. But other industry experts warn that switching to LNG will result in higher emissions of methane, a potent greenhouse gas, thereby erasing the fuel’s potential climate benefits.

“Many [ship] owners have yet to take the first steps into the transition,” Ørbeck-Nilssen said, adding, ​“We need action, we need first steps, we need innovation.”

Although the United States now has just seven offshore turbines spinning in its waters, more than 35 gigawatts of offshore wind projects are in various stages of development along the East Coast. But to build those wind farms, the U.S. will need to build and buy significantly more specialized ships.

“It’s not only about decarbonizing maritime shipping,” Mauger said. ​“There’s an opportunity to decarbonize shore-based activity as well.”

I’d gone to Connecticut earlier this week to learn about the shipping industry’s efforts to ditch fossil fuels and to hear how members talk among themselves about the challenges ahead. But as I walked from the conference ballroom to the train station, my ears turning red from the fierce winds, what stayed with me most was the concern expressed by many about the increasing difficulties facing seafarers.

People who work on ships are already often underpaid and treated poorly. All the supply-chain disruptions and travel restrictions that result in logistical headaches can, for seafarers, mean even more time away from family without earning extra pay. As the industry frets about its future fuel supplies, leaders are growing worried about having enough crew members to even sail those ships.