Canary chats with Generation Dread author Britt Wray about climate anxiety and how to deal.

From viral TikTok posts to an Oscar-nominated film, climate anxiety is now part of the zeitgeist, as evidenced by data from Google Trends.

Most recently I talked by video with Britt Wray, a Stanford postdoctoral fellow who writes a popular newsletter on Substack about eco-anxiety and how to cope with it. She’s also written a book on the topic, Generation Dread, which was released earlier this month.

Adam McKay, the director of Don’t Look Up, had this to say about the new book: ​“Dr. Britt Wray doesn’t ever look away from the hard emotional truths of the climate crisis. But it’s also exactly from this scary place that she is able to help us manifest something we all desperately need nowadays: strength.”

Here is my conversation with Britt Wray, edited for brevity and clarity.

Mike Munsell: Would you mind introducing yourself?

Britt Wray: I’m a researcher at Stanford University, where I study the mental-health impacts of the climate crisis, and I’m also the author of a new book called Generation Dread.

Munsell: I subscribe to your newsletter, Gen Dread. Can you tell me about that and its relationship to the book?

Wray: I started the newsletter a couple of years ago. It’s free on Substack and is about staying sane in the midst of the climate crisis. It was really a place where I felt I could at least start having a conversation with people about the emotional aftershocks of waking up to the severity of the climate crisis. Many people suffer with these feelings in isolation, rather than in the community, which can make what’s now being called ​“eco-anxiety” a lot worse, a lot harder to cope with. My own experience with eco-anxiety made me very curious about what the psychological impacts of the climate crisis — and the wider ecological crisis — are for other people, people who are not like me, because we’re all being affected very inequitably, in terms of how the climate crisis is showing up in our lives and our thoughts and our nightmares.

Munsell: You touched upon your own personal experience with eco-anxiety, which I previously read about on your Substack. Can you share more about that here?

Wray: In 2017, my partner and I started talking about trying to get pregnant. Of course, reading [United Nations’ Intergovernmental Panel on Climate Change] reports and peer-reviewed papers and interviewing climate scientists behind closed doors can sometimes be a terrifying experience. I was also noticing the lack of adequate action from all of our leaders on this issue and just feeling like we’re barreling into a future that gave me great pause about whether to put a kid into it. Although I have cared about this for a very long time, it became this emotionally turbulent uprising of grief and anxiety and rage — and this feeling of injustice that because of a history of fossil fuel misinformation and disinformation, corporate malfeasance, and abject failure of the political class, people in my generation and younger might actually pay the cost of not getting to know our own children. It just felt like the most painful dilemma. And at the time, it wasn’t clear if it was just me feeling this way.

Munsell: Can you talk a little bit about the themes in your book?

Wray: Although I think it’s fair to frame it as a deep dive on eco-anxiety, it’s also about real, acute mental health impacts of disasters — for example, understanding the trauma that takes place in the Bahamas where I did reporting after Hurricane Dorian — but also looking at what this means for frontline communities dealing with all kinds of impacts, whether we’re talking air pollution, or disasters, or what’s happening to Indigenous people who live very close to the land. For example, the Inuit communities in northern Labrador are seeing the sea ice disappear before their eyes, which means that a part of their identity is disappearing as well, and that connects with ongoing cultural trauma from colonization and genocide of Indigenous peoples. I was really trying to understand the problem from multiple perspectives, not just out of my own privileged, middle-class, white-person anxiety growing up in Canada.

The first part of the book is about understanding these emotional realities and how they show up differently for different people, and how we can direct those emotions toward justice-oriented outcomes. But it’s also about looking deeply at the psychological defenses we have, which have led us to this alarming state of ecological decline, and how we’ve evolved to have psychological defenses to protect us from reality when it’s tough to bear. 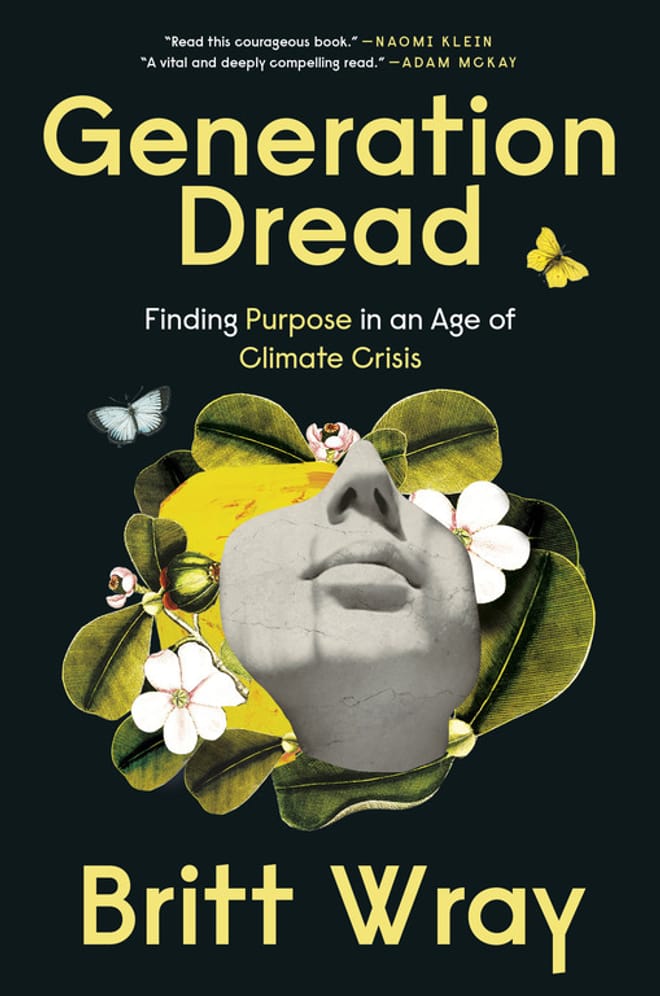 The second part of the book looks at coping with these emotions productively — tricks and strategies for calming the nervous system, for dealing with uncertainty and immense pressure and stress. And the third part of the book is about connecting outwards with others in order to reinvest this emotional energy and psychological suffering into actions that really matter.

Munsell: As a professional in the energy and climate space, I struggle with a dichotomy: On one hand, I feel that I’m barraged with climate catastrophe news 24/7. But simultaneously, I’m aware that we’re really close to the solutions and are seeing the energy transition happen in real time, albeit not fast enough.

Wray: Those who are really close professionally to the climate crisis are one of the frontline communities in terms of the psychological impacts. Staring into the abyss of the climate crisis eight hours a day takes a mental toll, but it often isn’t recognized. So many of us are buttoned up at work. Of course, there are no norms for talking about emotions when we’re dealing with rational, solution-based work, for example, or highly empirical data gathering on how the climate crisis is affecting our ecosystems.

Psychosocial supports to prevent burnout are critical but so underexplored. There’s a climate adaptation professional named Susanne Moser who specializes in creating the resources to support climate mitigation and adaptation professionals. It’s much like with the pandemic — we see that our frontline health care workers are burning out in massive numbers doing the kind of work that they’ve needed to do for the last two-plus years. The emotional drain is real. And as the climate crisis continues to challenge our communities, the demands on all the experts in the climate space will also continue to grow.

Interestingly, many of the people like you who are so close to solutions understand that all is not lost. And that’s key — being able to have eyes on the solution, not just what we’re fighting against, but what we’re working for. And being able to have that within reach is so important for the way that we’re modeling our climate communications, giving people robust, meaningful pathways to think through and imagine that are inherently hopeful. And to get away from the misinformation, which often a depressive mindset can kind of cling to.

Munsell: Do you have any advice for Canary’s audience of energy and climate professionals and policymakers?

Wray: I would suggest creating a space in your work team to have a conversation about how everyone’s feeling, because everyone, I’m sure, is really talented and committed as an external action-taker. But is there also a space for addressing the psychological, internal, emotional aspect? Can having conversations that validate this lead to greater connection to your colleagues and to the work? Could it be helpful?

Munsell: I mentioned earlier that I read your newsletter, Gen Dread. Do you have any favorite energy or climate newsletters?

Wray: I like the Weekly Planet newsletter in The Atlantic by Robinson Meyer, Heated by Emily Atkin (now on hiatus), Bill McKibben’s The Crucial Years, and Hot Take by Mary Heglar and Amy Westervelt. I’m looking forward to the new one in The New York Times by David Wallace-Wells.

If you’re a regular reader of Friday Social, you know I’m a fan of crowdsourcing. For today’s article, I tapped the climate and energy online brain trust in order to create the definitive directory of energy and climate email newsletters.

As part of a forthcoming @CanaryMediaInc Friday Social article, I'm pulling together a directory of energy & climate newsletters, similar to the previous podcast directory.

So #energytwitter & #climatetwitter, what are your favorite energy & climate newsletters?

Dozens of newsletter readers and authors chimed in across Twitter and LinkedIn.

Below is the extensive, if not exhaustive, list of energy and climate newsletters, as crowdsourced by Canary readers. And if you’re not yet subscribed to Canary’s newsletter, be sure to click the yellow button at the top of this page.

The Atlantic’s The Weekly Planet

CBC’s What on Earth?

Eye on Ohio’s Eye on Utilities

My World’s on Fire

Pique Behind the Curtain

The Planet You Save

Mike Munsell is director of growth at Canary Media.