Carbon storage gets dirty: The movement to sequester CO2 in soils

U.N. climate report promotes soil as a tool to reduce emissions, but scientists are still figuring out how it works.

For centuries, converting forests and meadows into industrial-scale farmland has unleashed carbon into the atmosphere. Terrain that once served as a carbon sponge has over time become a major contributor of global greenhouse gas emissions. Now scientists and farmers are working to reverse that trend by studying how well cropland and pastures can pull carbon dioxide from the sky and store it back in the soil.

The idea of ​“soil carbon sequestration” is gaining traction with U.S. food producers and policymakers as a way to counteract the environmental toll of growing commodities like corn, soy and beef. The concept falls into a wider category of potential solutions for achieving ​“carbon dioxide removal,” which includes everything from planting trees and deep-sea kelp forests to spreading minerals over oceans and using giant air-sucking fans to capture CO2.

Such approaches are now ​“unavoidable” if the world is to achieve net-zero emissions in less than 30 years, the United Nations’ Intergovernmental Panel on Climate Change said this week. After rapidly phasing out coal, oil and gas and accelerating adoption of carbon-free electricity and fuels, some residual emissions will likely occur — and those must be canceled out in order to keep global warming to 1.5 degrees Celsius.

The IPCC’s latest report lists soil carbon sequestration as one of the lower-cost, more readily available options for carbon dioxide removal. Planting seeds without disturbing soil, spreading nutrient-rich compost over fields, and rotating where cattle graze are all considered strategies for trapping carbon. Scientific estimates of soil carbon sequestration’s potential vary widely, from 1 metric gigaton of carbon dioxide per year to as high as 8 gigatons.

Although sustainable agriculture methods aren’t new, and many trace their roots to Indigenous practices, pilot projects and real-world trials are emerging to determine which farming and grazing strategies could be best for storing carbon in soil. Scientists are developing new tools to accurately measure and monitor soil carbon at a massive scale, and policymakers and environmental groups are studying how to set protocols for how farmers should report and verify those measurements.

Such steps, however, are mostly happening in scattered and piecemeal ways across the U.S. agricultural sector. Carbon180, a nonprofit that advocates for carbon-removal strategies, recently proposed a $2.3 billion ​“soil carbon moonshot” plan to unify those efforts and boost federal funding in this field.

“There’s a real movement to consider these nature-based solutions as ​‘shovel-ready,’ or something that we can implement quickly as a no-regret strategy,” said Giana Amador, co-founder and policy director of Carbon180. But more fundamental research and demonstration projects are needed to further establish how soil carbon storage works, and to identify the best practices for a wide variety of U.S. agricultural producers, including not just industrial operators but also small-scale farmers and growers of specialty crops like organic fruits and vegetables, she said.

That’s especially important given the growing interest in selling off ​“tons” of carbon sequestered, and related concerns that soil carbon credits could amount to greenwashing by giant companies. Firms such as General Mills, Cargill, IBM and Microsoft are already voluntarily purchasing soil carbon from farms to help meet their corporate sustainability goals.

“We see…a lot of private companies and the federal government putting the cart before the horse when it comes to voluntary carbon markets or other soil-carbon-focused incentives,” Amador said. ​“We think that science is a really necessary precondition to having robust, effective incentives” for producers, she added.

One way to both ensure rigorous accounting and persuade cash-strapped farmers to change their ways is to make it faster and cheaper to conduct soil sampling.

Today, samples are often dug up by hand and mailed to a faraway lab, where it can take technicians days or weeks to analyze the carbon content. Just a few vials from one farm won’t cut it. Soil characteristics can vary widely across even the same field, and carbon can take years to accumulate in the dirt. All that means researchers need to meticulously collect many samples to know how well the farmland is working as a carbon sink over time.

“You have all these variations in the soil system that you want to measure, and you also want to be able to detect and verify a very small increase in the quantity [of carbon] over the year,” said Yufeng Ge, an associate professor at the University of Nebraska-Lincoln. ​“So you have to collect a lot of samples, and that becomes very expensive.”

Ge’s research lab uses imagery from satellites and drones to remotely measure the water and carbon content of cornfields. The idea is to develop sensors that can gather real-time measurements at large scale without collecting physical soil samples. Another novel tool developed by the Soil Health Institute involves 3D-scanning the soil with lasers and using a smartphone app. Cristine Morgan, the institute’s chief scientific officer, helped develop this approach to detect the differences in soil health on conventionally tilled and ​“no-till” farms. 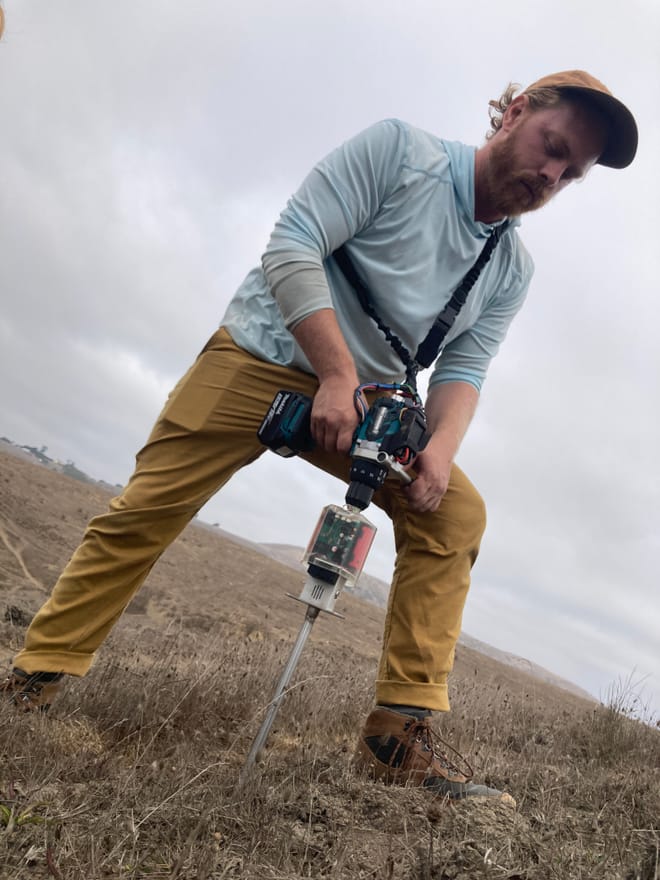 Morgan and Ge are both scientific advisers for Yard Stick, a startup developing a hand-held soil probe to take instant digital measurements in the field. Yard Stick was founded alongside the Soil Health Institute using a $3.6 million grant from the U.S. Department of Energy’s Advanced Research Projects Agency-Energy. Based in Cambridge, Massachusetts, the startup has separately raised investment from Breakthrough Energy Ventures and Lowercarbon Capital.

The soil probe resembles a high-tech mechanical drill, with tiny cameras fitted in the tip of its 45-centimeter-long metal rod. The device uses spectroscopy to capture the wavelengths of light bouncing off of organic carbon in the soil. By combining that with torque resistance sensors, the probe can determine the content and density of soil carbon with just a quick jab in the ground.

At least, that’s what Yard Stick is working to achieve, said Chris Tolles, the startup’s CEO and co-founder. The company is testing its technology on commodity corn and soy fields in the Midwest, with the goal of proving its digital readings can match the results of traditional soil samples tested in a lab.

“Soil carbon is something that can have a real impact, so we’re focused on doing it right, rather than doing it fast,” Tolles said.

As soil scientists refine their sampling tools, conservation groups are working to determine which agricultural strategies can not only store carbon in the soil but also balance a raft of other concerns, such as making sure fields don’t produce fewer crops, protecting existing wildlife habitats, and not cutting into food producers’ already razor-thin profit margins.

“We’re always thinking about, either at the ranch or landscape level, wanting to ensure that the practices are achievable and feasible, and that they can be measured or at least modeled,” said Sasha Gennet, who leads the North America sustainable grazing lands program for The Nature Conservancy.

The organization is working with cattle ranchers in the Northern Great Plains, a broad expanse of grasslands in Montana, to restore habitats and vegetation in the riparian area between rivers and streams, a process that’s expected to improve soil health and boost carbon in the ecosystem. Gennet’s program is also launching a ​“virtual fencing” project that uses GPS-enabled collars to guide cattle toward specific pastures — an approach somewhat similar to invisible fences for pets. The idea is that ranchers can move their herds into new areas without building physical infrastructure and disturbing the land.

Carbon-storage practices could, in theory, help offset at least some of those emissions. A 2020 study found that one organic ranch in Georgia significantly reduced its lifecycle emissions by rotating the grazing and ranging areas of cattle, chickens and pigs over 3,000 acres. But the approach required 2.5 times more land than conventional beef production, Civil Eats reported.

That finding speaks to a big concern among soil carbon proponents and skeptics: that carbon-storing strategies could compete with the planet’s need to feed a global population that’s expected to approach 10 billion by 2050. For the world’s agricultural producers, the challenge now is to grow food in more sustainable ways without razing even more forests or clearing land.

Along with boosting soil carbon, ​“The other major objective is avoiding conversion of additional lands,” Gennet said. ​“You’d want to have a plan in place before you really jump in so that you don’t end up with unintended consequences or ineffective practices.”