Plus, we kick off our new career Q&A series with Amy Duffuor of climatetech VC firm Azolla Ventures.

We’re introducing a new feature in Charging Up: short Q&As with industry role models about their career paths. You’ll find our usual updates on career transitions below the interview.

Amy Duffuor: A venture capitalist who connects on climate 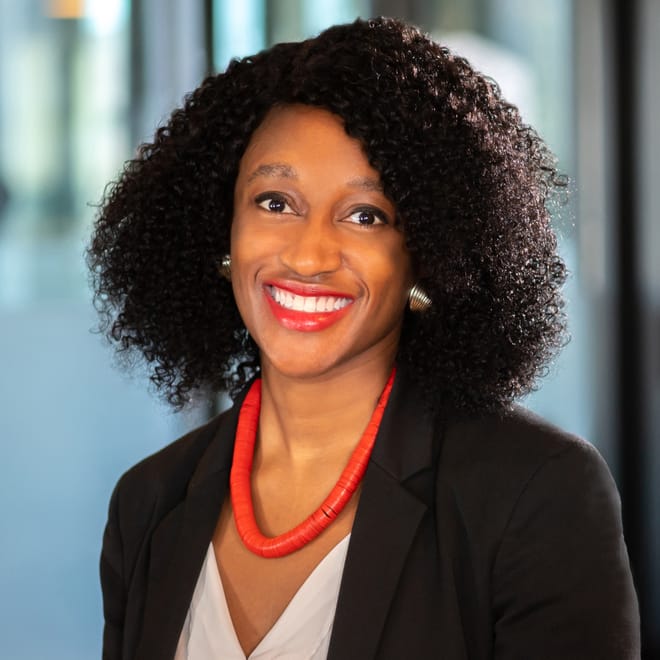 Amy Duffuor is co-founder and general partner at Azolla Ventures, a Boston-based venture capital firm that invests in early-stage technology companies with the potential for transformative climate impact. This interview has been lightly edited and condensed for brevity.

I’ve always had a hybrid background in finance and impact investment but became very religious about climate change. What resonated most was its effect on human beings — particularly low-income communities and communities of color, which are disproportionately impacted. So I wanted to invest in companies that I thought were taking a unique approach to addressing the climate crisis and help them scale. I was fortunate to meet my current partners at our predecessor fund, and we, alongside our nonprofit and impact founder, Prime Coalition, built Azolla Ventures.

Lean in to what makes you unique and different. I love talking about how climate change impacts all of us, and I want to make the climatetech VC landscape accessible. We tend to use very jargony and technical language, which not everyone understands, but for me, addressing climate change is about bringing in as many people as possible into a collaborative and inclusive space. It took me a while to feel comfortable leaning in to that side of myself professionally.

I was (and still am) one of the few women of color in the climate VC space. There are even fewer Black female investors who are writing checks. It can be hard to be in a space where my presence itself is subversive. I think sometimes when you’re in those environments, you want to try and be like everybody else, but as I just mentioned, it’s always served me well to lean in to what makes me different.

Opportunities in oceans and bluetech, like decarbonizing maritime shipping and working on carbon removal and sequestration, are really fascinating. We need more people — particularly of diverse backgrounds — working on those solutions. I would also love to see more work on how this area intersects with equity and access. So, for example, if you’re working on a coastal carbon-capture company, can you be thoughtful about how this impacts coastal communities?

My ability to connect with different types of people. I am a huge people person and love learning about what drives people and makes them passionate. I have worked on three continents and in many spaces where people don’t look like me. Those experiences, which I have been privileged to have, allow me to connect with people on different levels, and that has served me well both personally and professionally.

On the subject of venture investors…

Elizabeth Kaiga was promoted to chief commercial officer for North America at DNV, a provider of testing, certification and technical advisory services to the energy value chain. Kaiga is also board president at Women of Renewable Industries and Sustainable Energy (WRISE) and a board member at Solar Sister.

Sandy Anuras, who recently served in an SVP role at Expedia, has been hired as CTO by leading U.S. residential solar and storage installer Sunrun.

Marisa Sweeney is now VP of the investing team at Generate Capital, a sustainable infrastructure investment and operating firm.

Noelle Paige has been hired as VP of project development at Onyx Renewable Partners, a developer and financier of renewable energy for commercial, industrial and municipal customers. Paige was previously with Summit Ridge Energy.

Laura Fernandez has taken on the role of VP of supply chain at Sunnova Energy, a provider of residential solar, battery storage and system protection services. Sunnova also promoted Alina Eprimian to director of communications.

Alison Mickey has been promoted to senior director of communications at Fluence; Anissa Dehamna is now product manager for battery strategy. Fluence is an energy storage company created and backed by Siemens and AES.

A 2019 report published by the Solar Energy Industries Association and the Solar Foundation and recently reported on by Ecowatch found that women in the solar industry earned $0.76 on the dollar compared to men — slightly less than the 82 cents to the dollar that Pew Research reported across all full-time workers in the U.S. The report also found that women make up just 26 percent of the solar workforce.

As She Rises is a new podcast from Wonder Media Network. According to the creators, ​“Each episode carries the listener to a new place through a collection of voices, local recordings and soundscapes. Stories span from the Louisiana Bayou to the silent tundras of Alaska to the receding coastlines of Puerto Rico. Centering native voices and women of color, As She Rises personalizes the elusive magnitude of climate change.” Host Grace Lynch was formerly a podcast producer with FiveThirtyEight.

English artist and sculptor Barbara Hepworth (1903–1975) first gained acclaim as a groundbreaking sculptor of bracingly modern abstract shapes crafted from organic materials. By the early 1930s, she was both an internationally known leader of the avant-garde and a stay-at-home mother of triplets. Years later, in the aftermath of World War II, Hepworth found that sculpting materials were in short supply. She struck up a friendship with a local surgeon and accompanied him into the operating theater. The result was a series of compositions called the ​“Hospital Drawings,” which ultimately came to be regarded as some of her most important work. Shown below is Duo–Surgeon and Sister (1948).