In New York City’s Sunset Park, Equinor’s plan for a wind turbine hub is part of the community’s larger vision to clean up and revive the waterfront.

This article is part of our special series Power by the People: Clean Energy from the Grassroots.

A sprawling concrete lot overlooks the blue-gray bay in Brooklyn, New York, a smattering of weeds bursting through the cracks in the pavement. Cargo ships and orange ferries breeze by the lot’s empty piers. Behind them, the torch of the Statue of Liberty shimmers in the distance.

This stretch of waterfront once bustled with the unloading and collecting of cargo, including imported cars and thousands of tons of Nigerian cocoa beans bound for chocolate-making factories. But in the 1990s, shipping activity shifted to other ports, leaving the piers vacant.

For Elizabeth Yeampierre, the empty space holds enormous potential — a chance to build something better than what came before. 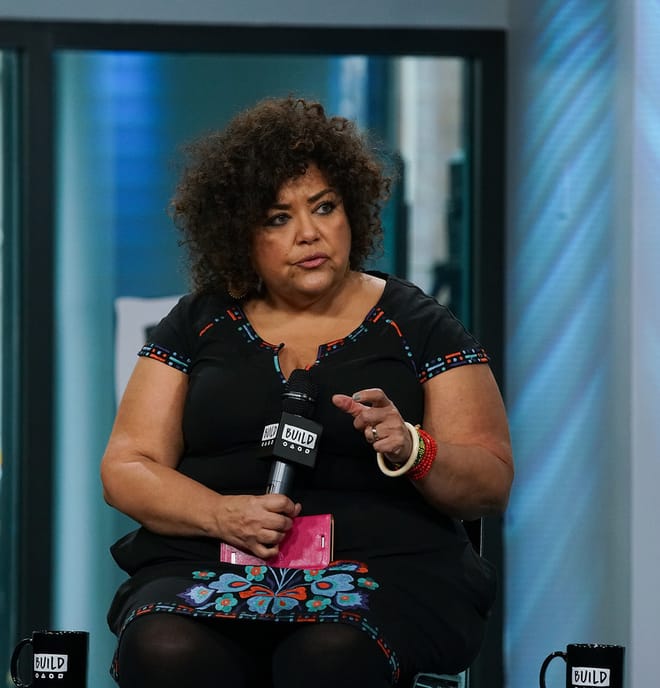 Yeampierre is a long-time resident of Sunset Park and the executive director of UPROSE, a grassroots organization that serves the neighborhood. UPROSE and other local groups have pushed for years to revitalize the dormant waterfront. Not by building luxury apartments and retail shops, which they say would hasten gentrification, and not by adding dirty factories that further pollute the air — but by developing clean-energy industries in their own backyard.

Maritime areas can be ​“vehicles for addressing our climate needs, for creating community wealth and addressing the legacy of historical harm in our communities,” Yeampierre says.

That vision is about to be realized here in Sunset Park.

The 73-acre South Brooklyn Marine Terminal will soon become a hub for storing and assembling offshore wind turbines. Equinor, the Norwegian energy giant, and its partner BP plan to build a staging ground for the sprawling wind projects they’re developing in the Atlantic Ocean. The offshore wind farms will be among the first to appear in U.S. waters. The Sunset Park facility will be among the first of its kind on U.S. shores.

Yeampierre says she’s so excited about the project that she almost wants to pinch herself in disbelief. Still, she adds, the community has much to do to prepare. UPROSE belongs to a local coalition called the Sunset Park Task Force that’s working to ensure local residents are trained and ready for jobs in offshore wind — a sector that’s only just emerging in the United States.

Alba Pena, Equinor’s community engagement manager in Brooklyn, says the company expects to create around 1,200 jobs in construction and operations once it starts building the hub in 2024. ​“This is a community that has been overlooked in the past and that is very passionate about climate justice,” she says of Sunset Park. ​“What we hear from them is, ​‘We want to be at the table.’”

A green-industry dream takes hold in the wake of disaster

Some 131,000 people live in the tightly packed apartment units, aging brownstones and tidy row houses of Sunset Park. Avenues lined with fish markets and noodle shops in the area’s Chinatown run parallel to roads brimming with Mexican taquerías, Peruvian chicken spots and Ecuadorian food trucks. Repair shops crammed with electric bicycles and mopeds serve the many app-based delivery workers who live in the neighborhood. A leafy hilltop park offers a respite from the rumbling industry down below.

In 2012, residents of New York City received a brutal wake-up call with the arrival of Hurricane Sandy, which struck the U.S. East Coast on October 29. Although Sunset Park was spared the worst of the deadly storm, the neighborhood next door suffered extreme flooding. Thousands of residents in Red Hook went weeks without heat and power, including at the largest public-housing complex in Brooklyn. Inundated roads and damaged subway lines made travel across the city difficult.

Even as residents were still clearing debris and pumping out soggy basements, UPROSE began holding neighborhood meetings on how to prepare for the next climate-fueled disaster. These early efforts to adapt to climate change involved enlisting ​“block captains” to learn about climate resiliency and serve as point people during emergencies. Volunteers also mapped the local businesses that store industrial chemicals at risk of leaking in a storm, an effort that led to better safety protocols.

Over time, organizers and community members began discussing not just storm recovery and resiliency but also the root cause of climate change — the emissions of planet-warming greenhouse gases, the vast majority of which come from burning oil, gas and coal.

“We realized that, as we are moving toward more superstorms and more clear impacts of the climate crisis, that we have to move toward green energy,” recalls Alexa Avilés, a community activist and New York City council member who represents and lives in Sunset Park.

UPROSE and local solar companies worked to develop the neighborhood’s first community solar project. And a new vision for the abandoned waterfront took shape: Businesses could use the empty maritime areas to manufacture or assemble clean-energy technologies like solar panels and wind turbines. Electric trucks and vessels could recharge their batteries from the waterfront’s expanded electrical infrastructure.

Avilés says residents began to contemplate a world in which they didn’t have to choose between well-paying jobs at polluting factories, or derelict spaces but cleaner air. ​“We felt like no, we want oxygen and a good wage,” she adds. ​“We deserve both.”

Then, in 2015, an opportunity emerged. The New York City Economic Development Corporation announced it was seeking proposals to fill the 73 acres of empty space at the Sunset Park waterfront.

The nonprofit corporation cast a wide net; any kind of cargo activity might do. But soon after, New York state officials began outlining ambitious goals to develop renewable energy across the state — including offshore wind power, which for densely populated coastal cities is one of the few available opportunities to build out renewables.

Offshore wind companies, including Equinor, began reaching out to community groups like UPROSE and local business leaders with plans to transform the vacant terminal. Developers would need a place to store, assemble and repair the enormous blades and towers of offshore wind turbines — some of which stand nearly 900 feet tall — before hauling them out to sea. Specialized vessels carrying turbine parts and crew members would need to load, unload and refuel at the piers.

At the same time, a separate effort to commercialize parts of the waterfront was getting underway: The owner of a neighboring development called Industry City was proposing a $1 billion expansion that would potentially surround the South Brooklyn Marine Terminal with high-end hotels and luxury retail shops.

Proponents said the expansion plan could create as many as 20,000 jobs. Critics argued the megadevelopment risked raising property values in Sunset Park in exchange for adding mostly low-wage retail positions. They also worried it would threaten the development of green industrial activities. At neighborhood meetings and city hearings, climate advocates and progressive politicians railed against the plan.

“This rezoning could exacerbate real estate pressures, displacement, rising rents, congestion, pollution and forever shift the nature of the waterfront away from manufacturing to commercial tourism,” U.S. Representatives Nydia Velázquez (D-NY) and Jerrold Nadler (D-NY), along with New York State Senator Zellnor Myrie (D-Crown Heights), wrote in a 2019 letter to the Department of City Planning.

Maintaining Sunset Park’s industrial character is key to keeping housing affordable in the area, says Eddie Bautista, executive director of the New York City Environmental Justice Alliance, of which UPROSE is a member.

“Some people say the best way to improve the quality of life in these [frontline] communities is to…zone out these [industrial] uses,” he says. An alternative path is to create new clean-energy-related activities while also cleaning up pollution from existing facilities. In Sunset Park, those sites — along with heavy truck traffic — contribute levels of harmful air pollution that are higher than in Brooklyn and New York City as a whole.

“Our mission has been to attract the sort of industries that we need to execute a just transition for New York,” Bautista says.

In 2020, amid the mounting pushback, the developer of Industry City withdrew its proposal, marking an important victory for those who favored the development of green industry. Not long after, plans to revamp the South Brooklyn Marine Terminal started to solidify.

Prepping Sunset Park for a new kind of industrial waterfront

In March, Equinor signed an agreement with the city’s Economic Development Corporation to use the 73-acre site to stage and assemble turbine components imported from Europe. Equinor and BP are jointly developing two offshore wind farms: the 2.1-gigawatt Empire Wind project near Long Island and the 1.2-gigawatt Beacon Wind project off the coast of New England.

The projects are part of a larger push in New York state to build 9 gigawatts of offshore wind capacity by 2035, enough to supply roughly 30 percent of the state’s total electricity needs. Along with generating more carbon-free power, state and city officials are hoping to snag many of the jobs and supply-chain investments that are expected to emerge with the fledgling U.S. industry.

“We are enormously proud to lay the groundwork today for our vision of making New York City a nation-leading hub for the offshore wind industry,” Lindsay Greene of the Economic Development Corporation said earlier this year when the Sunset Park hub was announced.

Along with New York, nine East Coast states and Ohio have offshore wind projects in the pipeline, and California is pushing to develop floating wind farms off the Pacific coast.

Still, the United States has a ways to go to catch up to the rest of the world. Of the 56 gigawatts in cumulative offshore wind capacity installed globally, less than 0.1 percent is spinning off the U.S. coast, with five turbines near Rhode Island and two near coastal Virginia.

In Sunset Park, Equinor and BP say they will invest $250 million to upgrade infrastructure at the South Brooklyn Marine Terminal and to make it a ​“low-emissions facility.” Crucially, the developers pledged to create a $5 million ​“ecosystem fund” to help train and prepare New York City residents for offshore wind careers. Equinor will build a public learning center within its offices in Sunset Park. It’s also creating a workforce-development plan to assess gaps in local skill sets for various stages of the project.

Alba Pena, from Equinor’s Brooklyn office, said her outreach team is quickly expanding and is working closely with the Sunset Park Task Force, the coalition of elected officials, local residents, businesses and community groups. ​“While we have experience in offshore wind, it doesn’t mean we have experience in offshore wind in the U.S.,” she says.

Avilés, the city council member, is part of the task force. She says the project will only be successful in her eyes if it delivers on the promise of clean-energy jobs for Sunset Park residents.

“The community that has borne the brunt of environmental racism needs to be at the front and center of receiving the [hub’s] benefits,” she says.

For its part, UPROSE plans to continue to push for other improvements, such as making sure that specialized ships don’t idle and pump harmful exhaust into the neighborhood, as well as securing space on the rooftops of Equinor’s buildings for community solar projects. As offshore wind takes off along the U.S. coastline, Yeampierre says she hopes Sunset Park can serve as a model for including marginalized communities in the development of this new U.S. industry.

“For us, it’s really important that what happens here becomes a guidepost for people across the country,” she says.

On this week’s episode of The Carbon Copy podcast, Maria Gallucci talks more about her experience reporting this story and the community of Sunset Park, Brooklyn. Check it out: