Smartenit has bundled smart-charging tech into a cord that plugs into standard outlets. That’s useful for people who can’t easily install chargers at home.

Today, charging an electric vehicle at home tends to happen in one of two ways — with a cheap but dumb charging cord or a smart but expensive charging station.

Plugging the cord that comes with your new EV into a standard wall socket is a cheap but relatively slow method of refilling an EV battery. It’s also ​“dumb,” offering little to no control over when and how the car charges, and lacking sensors to help prevent overloading household circuits.

A ​“smart” charger that can actively pick the most cost-effective rates and times to schedule charging is far more effective. But these devices can cost $1,000 and up, and they’re only easily installable for homeowners who can park their cars conveniently adjacent to household electrical circuits hefty enough to support them.

Al Choperena, CEO of Irvine, California–based Smartenit, thinks his company’s new smart EV charging cord is the answer to this either-or dilemma. It’s cheap — between $350 to $500 depending on whether it’s designed to plug into a standard 120-volt or 240-volt household outlet — compared to at least $1,000 for a Wi-Fi-connected, 240-volt Level 2 home charger, a price that doesn’t include installation. Smartenit’s cord, by contrast, doesn’t require professional installation.

But Smartenit’s EV charging cord is also just as smart as other smart chargers — if not a little bit smarter, in Choperena’s opinion. That’s because it comes embedded with hardware and software that can integrate not just with EV-charging smartphone apps and utility rate and alert programs but also with myriad other energy-aware devices such as smart thermostats and remote-controllable lights and appliances.

This combination of low cost and high functionality is quite helpful for the nearly four-fifths of U.S. adults who today lack access to at-home charging, according to a recent survey by Morning Consult. That includes people who rent their residence and can’t install equipment without a landlord’s permission, as well as those who live in homes that lack a private garage or off-street parking where they can install a dedicated charger.

Finding ways to expand EV charging not just to wealthy residents of single-family homes with garages but also to apartment dwellers, people living in dense urban areas and lower-income communities will be an important step in meeting the equity goals of much of the federal and state-level funding geared to boost EV adoption. 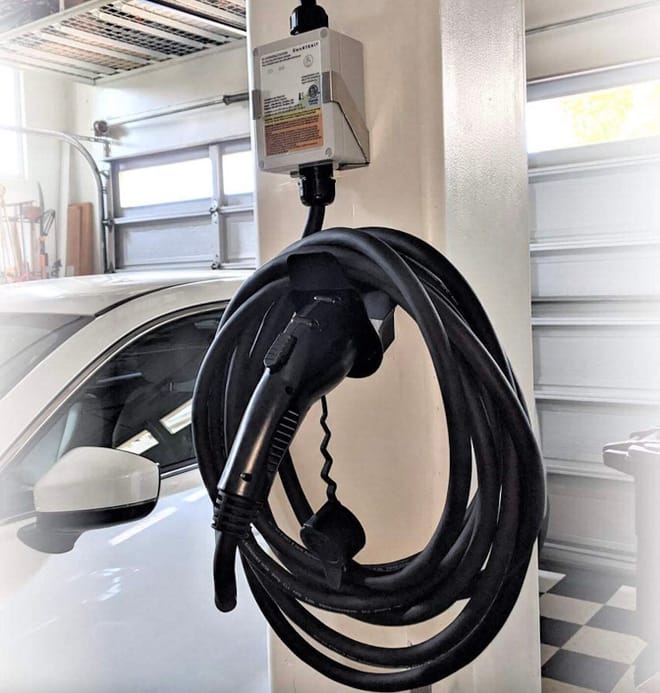 This EV charging cord embeds the digital controls and communications of a smart charging station, but it can be plugged into a standard outlet. (Smartenit)

Smartenit is working with a number of partners on bringing its smart-charging cord to market, he said. One of the first is EV charging software vendor ev.energy, which announced last month that it’s making the Smartenit cable available as eligible equipment in a number of the utility smart-charging programs it manages, including with National Grid in Massachusetts, United Illuminating in Connecticut, and community choice aggregators Silicon Valley Clean Energy and MCE (formerly Marin Clean Energy) in California.

The incentives that these utilities offer to drivers can be lucrative, said Joseph Vellone, head of North America for ev.energy. United Illuminating offers $50 a month for EV drivers who agree to let the utility ramp down their charging during times when the grid is under stress, for instance. ​“That is an incredibly generous incentive that should not just be going to Tesla drivers who have a fancy Level 2 charging station in their detached family home.”

The Smartenit cable is ​“very renter-friendly,” Vellone pointed out. ​“You don’t need to get permission from your landlord. You can plug it into your EV, and then either into the outlet you can find in your parking lot, or run the cable through the window” of an apartment or condo.

To be clear, the ​“dumb” charging cords that come with EVs today can be used in the same way. ​“You can go on Amazon and buy a cord for a couple hundred bucks,” he said. But that won’t give EV owners access to the utility systems that offer incentives in exchange for responding to pricing data or emergency power-down signals.

More modern EVs do come with onboard telematics that can interface with these utility systems, he said. But that’s not the case for older EVs, including the increasing number of used vehicles that could offer lower-income families a way to go electric.

Smartenit’s controls technology fills those gaps neatly, according to Vellone. One key feature is its built-in electricity metering system, which conforms to federal standards that many utilities require for charging equipment to qualify for special EV-friendly rates, such as those being implemented by California’s biggest utilities.

Smartenit’s charging cables are also able to communicate via Wi-Fi, Zigbee and Bluetooth wireless standards, Choperena said. That’s important flexibility for energy devices that may need to be used in a variety of different settings.

Smartenit’s underlying technology stack has evolved over more than a decade of experience integrating energy control hardware and software into a range of energy-aware devices, he pointed out. The company has worked with device makers including General Electric, Intel, NRG Energy and EV charger manufacturer Clipper Creek over the years. Its internet-of-things control platform has managed pool pumps, electric baseboard heating and water heaters, landscape irrigation systems and home security monitors, and it has been integrated with the back-office systems of a number of utilities.

That makes its smart EV charging cords not just an EV controller but also an IOT hub for managing a range of devices, he said. ​“If you have our app — which we give away for free — you can buy this charging cord from us, and the same app controls the lights or anything else that can be networked,” he said. Customers can use the same platform to control those devices for utility time-of-use rates or signals that offer financial rewards for turning down power use during times of grid stress, he said.

That intelligence also allows multiple Smartenit charging cords to communicate with each other, including setting limits on how much power they’re drawing in relation to one another, he explained. That’s a potentially valuable feature for adding charging capacity to parking lots and garages that have lots of electrical outlets but lack the wiring and electrical service to support many EVs charging at once.

“The chargers communicate with each other, and depending on priorities that you set, they can alternate” charging to keep total loads for the site under maximum limits, Choperena said. That means they could be used not just for apartment complexes but also for workplace charging — and not just ​“fancy workplaces.” Adding a simple plastic pedestal to house a Smartenit cord can serve as a sub-$1,000 replacement for Level 2 workplace chargers that typically cost about five times that much, he added.

This kind of interoperability and data-sharing is becoming an increasingly important requirement for EV charger manufacturers and charging software vendors. That’s particularly true for companies seeking to take part in public EV charging deployments being backed by billions of dollars of federal and state funds, many of which come with requirements to use open technology standards and make their chargers available to all drivers, not just those with subscriptions to individual charging networks.

The home EV charging space hasn’t yet seen the same kind of push for open standards and networks. But to enable the scale of EV growth targeted by vanguard states such as California and New York, or to meet the Biden administration’s goal of having half of all new passenger vehicle sales be EVs by 2030, at-home charging will need to become far more accessible than it is today — and cheap-yet-smart technology could help.

Jeff St. John is director of news and special projects at Canary Media.